PM defends system for appointing judges amid questions about ties to N.B. minister 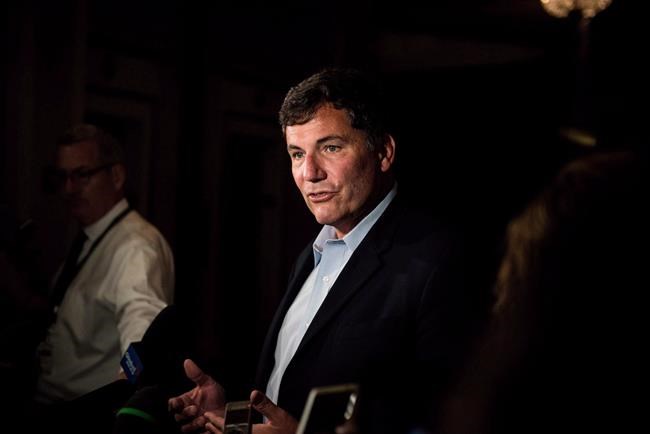 Media reports this week stated five of the last six federally appointed judges in New Brunswick have ties to LeBlanc, who is Trudeau's minister of intergovernmental and northern affairs.

One is LeBlanc's neighbour, according to the CBC, while a second is a relative by marriage and three helped him pay off debt he accumulated during his unsuccessful run for the Liberal party leadership in 2008.

A complaint has since been filed to the ethics commissioner by watchdog Democracy Watch, which is asking for the government to suspend further appointments until an investigation is concluded.

Trudeau didn't specifically address the five judges in New Brunswick when asked about them during an event Thursday in Montreal, but instead defended the Liberal-installed system for appointing justices.

"We have a merit-based, transparent appointment system," he said, adding: "We are pleased that we have nominated top-notch judges right across the country — and we will continue to."

The Trudeau government last month named lawyers Arthur Doyle and Robert Dysart to the bench in New Brunswick, where Elections Canada records indicate both have been regular donors to the federal Liberals and contributed to LeBlanc's failed leadership run.

Their appointments followed that of fellow lawyer Charles LeBlond, who also donated to the Liberals and to LeBlanc, in March.

LeBlanc is also neighbours with the new chief justice of New Brunswick's Court of Queen's Bench, Justice Tracey DeWare, who was appointed to the position last month, according to the CBC.

And Moncton family lawyer Marie-Claude Belanger-Richard, who was picked to fill a judicial vacancy last November, is reportedly married to LeBlanc's brother-in-law.

In each case, the Liberals touted the appointments as having come through a new application process established in October 2016, which instituted various changes to the 17 committees responsible for vetting prospective judges.

The government says the changes bolstered the independence and transparency of the process to ensure only the best candidates are recommended, though cabinet is ultimately responsible for signing off on each appointment.

"We are fully confident that the process, the transparent, merit-based process that we've put in place is the right one and we stand by it," Trudeau said Thursday.

The appointments have sparked criticism and allegations of Liberal patronage from the opposition Conservatives and NDP as well as an official complaint Thursday to federal ethics commissioner Mario Dion from Democracy Watch.

In a letter to the commissioner, Democracy Watch co-founder Duff Conacher asks for an investigation into what role LeBlanc played in the judges' appointments and whether he violated the conflict-of-interest law.

He also asks Dion to recuse himself from investigating because he was appointed by the Trudeau government and because of past comments in which Conacher says Dion showed "a bias toward weak and incorrect enforcement."

Dion's office confirmed it had received the complaint and that the commissioner would review it, but otherwise would not comment.