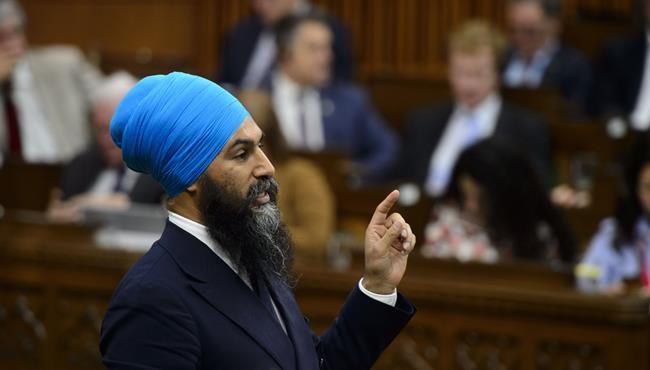 In an interview from Sherbrooke, Que., Singh said he is "not concerned" about the party's prospects in the province, noting that former leader Jack Layton had similar poll numbers prior to the 2011 election, when the NDP broke through in Quebec.

"I think there's a lot of support out here," he said. "We get lots of love. We've got 14 MPs, so there's lots of ground for us to work on. We've got a lot of great, specific candidates who have done work in their community."

(The party has 15 MPs in Quebec, according to the House of Commons.)

Singh, who was in Montreal on Monday, moved on to Sherbrooke on Tuesday, where the party pledged to build a train line between those two cities as part of a transit investment meant to combat climate change.

The leader made the announcement — a plan the NDP vowed will create close to 400 "quality jobs" and reduce greenhouse-gas emissions by 10,000 tonnes — with incumbent Pierre-Luc Dusseault. He was elected in the party's historic "orange wave" in Quebec in 2011 and became the youngest MP ever, sworn in just after he turned 20.

Singh said Dusseault has become an icon in the city after he was the youngest person elected and then went on to make a name for himself.

"I'm going to places where we've got strong support and where we can share a message that really resonates," he said.

Singh's summer tour comes as MPs and party members express quiet concern whether the party can indeed be competitive in the election, given its protracted challenges with fundraising and morale.

All federal parties are setting their sights on the upcoming election and their outreach efforts in key electoral battlegrounds, including Quebec.

Ultimately, the only public opinion poll that will count is the final poll on Oct. 21 when Canadians cast their votes, Singh said, adding he is confident people will be paying more attention during the formal campaign.

Karl Belanger, who was principal secretary to former leader Tom Mulcair, said that he agrees that leaders should not be concerned with polls and should focus on their central job of delivering their parties' messages.

The team around Singh, however, needs to be concerned about the polls and to examine why the party is where it is right now and what could give it more traction.

There are lots of challenges ahead for the party in Quebec, he added.

"It's mathematics," Belanger said. "If you are polling in fifth place, it will be hard to win a large number of seats, which is why Jagmeet Singh and his team have planned this tour and focused on an area where they can hold support."

Belanger did say, however, that the NDP is in a better position in many ways than it was under the late Jack Layton before the 2011 election that resulted in the party becoming the Official Opposition for the first time in Canadian history.

In 2015, the party won 16 seats in Quebec, making Quebecers the biggest provincial group in the NDP caucus.

"In that sense, there's a lot of strength there," Belanger said, noting incumbents will face a tough challenge in the upcoming race but they have the advantage of being incumbents — something the NDP didn't have in 2011 except for Mulcair.