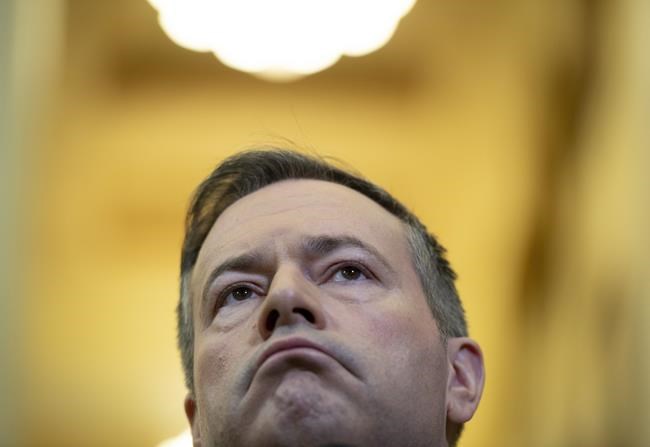 CALGARY — The CEOs of nine Alberta natural gas producers have released an open letter to Premier Jason Kenney asking him to show "bold leadership" in supporting a plan to restrict production to boost low gas prices.

The letter warns the province faces a high likelihood of corporate failures, job losses and falling investment levels if the situation is allowed to continue.

"It is imperative that the government of Alberta intercedes as the viability of the Alberta natural gas sector is in jeopardy," the letter sent late Tuesday reads.

"On our current trajectory, the consequences will be dire for the many Albertans that rely upon the natural gas sector directly and indirectly to support their communities."

The CEOs say their gas price problems have developed over many years, but point specifically to what they call failed federal regulation of TC Energy Corp.'s Nova Gas Transmission Ltd. gas pipeline system in Western Canada.

The letter proposes a solution in which gas producers commit to manage their production on a voluntary basis when needed to balance supply with system capacity, adding the scheme would result in no net loss to provincial royalty revenues and would allow companies to honour existing sales commitments.

The province's role would be to co-ordinate the program to fairly dole out production cuts for companies when pipeline capacity is affected, whether by planned maintenance or unexpected incidents, said Ryder McRitchie, vice-president of capital markets for letter signer Jupiter Resources Ltd.

The province would earn higher royalties despite lower gas volumes because of stronger prices and would then compensate the producers who voluntarily produce less by giving them royalty credits, he explained.

"What's happening right now is production is getting taken off the system anyway when there's outages but it's happening in a very erratic way," he said.

"So you're getting very volatile prices. We get minus-four cents (per gigajoule) one day and $2 the next."

In early July, the government announced a one-time tax relief program for shallow gas wells and pipelines that is expected to deliver about $23 million in support for producers.

In an email, associate minister of natural gas Dale Nally's office said Wednesday it is "evaluating a variety of short- and long-term options to maximize resource value for Albertans and revitalize Alberta's natural gas sector."

In a July newsletter posted on his company's website, Peyto CEO Darren Gee points out that the Alberta natural gas price at the AECO marketing hub has averaged $1.56 per gigajoule since August of 2017, while the corresponding Saskatchewan price was 76 per cent higher at $2.75, although the regulated toll for transport between the two points is only 18 cents per GJ.

"As an Albertan, the thought of effectively throwing our natural resources away angers me, especially as the provincial debt clock keeps ticking higher," Gee says in the newsletter.

The health of the industry is important to TC Energy, said spokesman Terry Cunha in an email, adding it is involved in ongoing meetings with producers and the government and is investing about $9 billion in projects to add gas delivery capacity.

Calgary-based Tourmaline Oil Corp., the largest producer of Canadian gas, is weighing the producer proposal and is not yet ready to support or object to it, said general counsel Scott Kirker on Wednesday.

He added smaller producers are more affected than large producers by low AECO spot prices because bigger players have more options, including price hedging programs and the ability to contract firm volumes on pipeline.