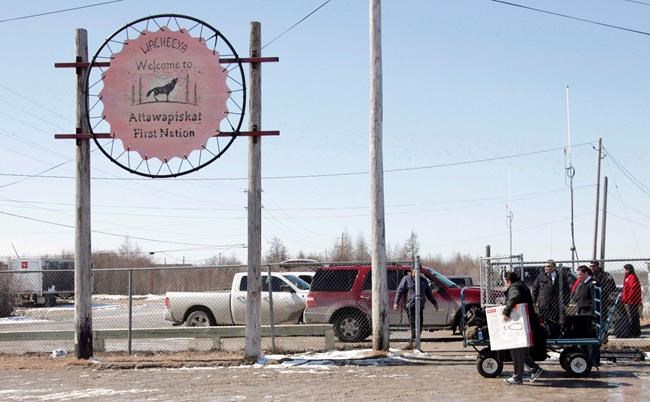 OTTAWA — Indigenous Services Minister Seamus O'Regan faced calls Wednesday from the federal NDP to visit the northern Ontario community of Attawapiskat First Nation so he can see the impacts of a state of emergency first-hand.

Earlier this month, Attawapiskat made the emergency declaration due to concerns about chemical levels in tap water.

NDP MP Charlie Angus, who represents the federal riding encompassing the reserve, met with the community on Wednesday alongside his colleague Tracey Ramsey.

Members of the community are worried about being able to safety bathe their children, Angus said, adding that is "not acceptable."

"I'm asking Minister O'Regan to actually come to the community, meet people, to see what it is like on the ground so he understands what the community is facing and then he hopefully will understand the importance of stepping up and working with them," he said.

A short-term and long-term plan is required to ensure there is adequate water and proper infrastructure in Attawapiskat so it can escape a "relentless cycle" of crises and uncertainty, Angus added.

The reserve drew national attention in 2012 for its housing crisis and more recently faced issues with youth suicide.

"People in Attawapiskat are really frustrated because they've had to fight for some of the most basic things that other people take for granted," Angus said.

Former chief Theresa Spence, who launched a high-profile protest over the housing situation, has also started a hunger strike over water concerns.

O'Regan's office said Wednesday that the government is aware of concerns and that addressing the water issue in full partnership with the First Nation is a top priority. A statement said that $1.5 million has been approved for immediate repairs to the reserve's existing water treatment plant, with work underway.

O'Regan's office noted that clean drinking water is available from a second system.

"We will continue to work with Attawapiskat and all First Nations communities to ensure they have access to safe, clean water," the statement said.