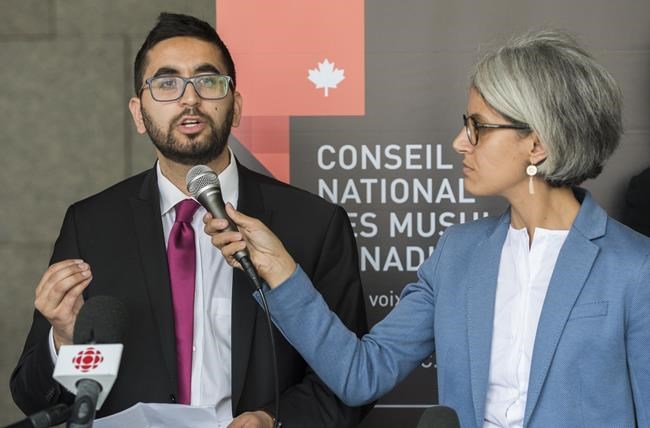 The National Council of Canadian Muslims and Canadian Civil Liberties Association announced their intention Tuesday on the steps of Quebec's Court of Appeal building in Montreal.

Last Thursday, the Quebec Superior Court ruled that Bill 21 would continue to apply in full until a challenge of the law could be heard on it merits — a process that could take months.

Justice Michel Yergeau ruled that the applicants had failed to demonstrate harm warranting a stay, but National Council of Canadian Muslims' executive director Mustafa Farooq argues that people are being affected by the law now and it must be stopped.

Farooq says if allowed to appeal, the groups plan to highlight areas where they believe Yergeau erred in his ruling.

"We disagree that the harm to people in Quebec is hypothetical — rather, it's actual,  inevitable and irreparable," Farooq said. "We believe that there is urgency in halting this law — that people are affected by Bill 21 now."

At its core, Farooq said, the law divides and forces people to give up their identities, and if they refuse, they're deemed unwelcome in segments of society.

The provincial law, which came into effect in June, bans some public sector workers, including teachers and police officers, from wearing religious symbols on the job.

And the law is having immediate impact. Amrit Kaur, a representative of the World Sikh Organization in Quebec and a recent teaching graduate said she has had to look elsewhere for employment.

"I'm actually being forced to look outside the province — in particular in B.C. — because of this bill," Kaur said. "To say that there are no immediate effects is a complete lie, because there are people like myself who have to choose between their faith and their careers, and they cannot put their faith aside so they have to leave their homes."

No date has been set before the province's high court.

Bill 21 invokes the notwithstanding clause of the Canadian Constitution, which prevents citizens from challenging the law for violating fundamental rights and liberties protected by the Canadian Charter of Rights and Freedoms.

Arguing on behalf of the two organizations and an education student who wears a hijab, the lawyers who challenged the legislation said the law is unconstitutional because it encroaches on federal jurisdiction, it is impermissibly vague and it violates citizens' rights to participate in their democratic institutions.

Yergeau said those arguments did not justify the stay, and he rejected claims the law itself was causing harm to Muslim women or to other religious minorities.

The Quebec government said it was satisfied with a decision that ensured the law would apply and is determined to defend its legitimacy.

On Tuesday, other organizations including the World Sikh Organization and B'nai Brith Canada said they are considering seeking intervener status in the case.

B'nai Brith's Steven Slimovitch said each individual must have a right to participate in society.

"Our position on Bill 21 is quite simple: It is a reprehensible piece of legislation. The state should never be involved in legislating religion in one form or the other," Slimovitch said.

Note to readers: This is a corrected story. A previous version said Amrit Kaur represents the World Sikh Council