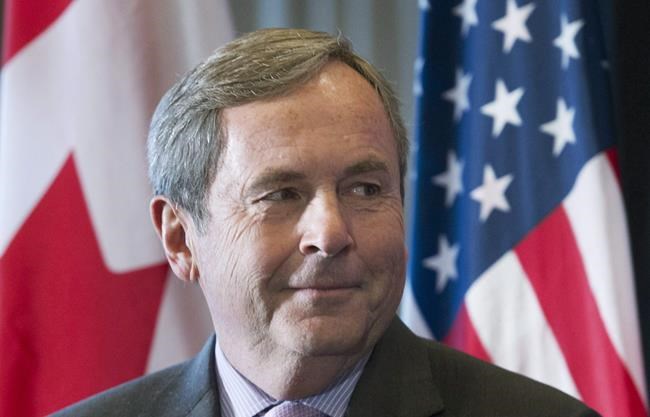 OTTAWA — David MacNaughton, the U.S. ambassador who became the fulcrum of the federal Liberal government's strategy for managing relations with an impetuous and unpredictable White House, says he plans to step down from the post at the end of the summer.

MacNaughton, who is vacating the job just weeks before Canadians go to the polls Oct. 21, said he intends to return to the private sector in Toronto. He'll be replaced on an acting basis by Kirsten Hillman, his deputy since 2017.

"I've never done anything in my life that has been as difficult as this — physically, emotionally — and part of that is just realizing what the stakes are," MacNaughton told a news conference Thursday at Canada's embassy in Washington.

"Having said that, I wouldn't trade it for anything because it's an honour and a privilege to represent your country anywhere, any time, but to have been here at this time, in this place, under these circumstances has been extraordinarily special.

"It's been an interesting experience, but I'm looking forward to the next chapter in my life."

When MacNaughton was appointed top envoy to the U.S. in March 2016, Barack Obama was president and the relationship between Ottawa and Washington appeared a cosy one — Justin Trudeau and his family found themselves at the White House barely a week later as the guests of honour during a lavish state dinner, the first of its kind in 20 years.

Before the year was out, however, Donald Trump had surged into the presidency, in part on a promise to scrap or renegotiate unpopular trade deals like the North American Free Trade Agreement, presaging a dramatic turn in Canada's relationship with its next-door neighbour and largest trading partner.

MacNaughton was a central player in the ensuing 13 months of talks to renegotiate the outdated trade pact, talks that culminated in a slightly retooled "new NAFTA" christened by Trump as the U.S.-Mexico-Canada Agreement. That deal has been approved in Mexico, but still awaits ratification in the U.S. Congress and on Parliament Hill.

In a statement, Prime Minister Justin Trudeau described MacNaughton as a "Canadian patriot" who played a pivotal role in those negotiations, as well as in finally securing relief from Trump's punishing tariffs on Canadian steel and aluminum, which lingered for months after the trade deal was signed.

"David's skill in bridging partisan and ideological divides — always putting Canadians' interests first, never deviating from objectives he knew to be both possible and desirable — has been unparalleled," Trudeau said.

"Working alongside our foreign minister, Chrystia Freeland, and Canada's team of expert negotiators, David has been our point person with Congress and with the U.S. administration, in the most difficult and uncertain trade negotiations this country has ever faced.

"It's no exaggeration to say his contribution has been historic."

The Democrat-controlled U.S. House of Representatives started its five-week summer break in late July without ratifying the deal, and both Trudeau and Freeland have repeatedly signalled that Canada won't proceed until after Congress does.

The Democrats have pushed hard for changes to the deal's provisions on labour, the environment, patent protection for drugs and enforcement. U.S. lawmakers, meanwhile, won't be in a position to take even the smallest steps towards ratification before the start of Canada's federal election campaign, which is set to begin by mid-September at the latest.

MacNaughton said Canada isn't willing to re-open the pact — "I've said to them, a deal's a deal's a deal" — but is willing to see what can be done within the confines of the negotiated agreement. He said he expected the deal to get congressional approval.

"Predicting outcomes in this city is not exactly a science, but I am confident that the Democrats, as well as the Republicans, want to get to 'yes' on USMCA," MacNaughton said.

"I won't say that it's a slam dunk by any stretch of the imagination, but I do think that there is broad support even within (and) among Democrats."

In a statement of her own, Freeland expressed gratitude for MacNaughton's cool head and wise counsel.

"At a time when our country faced unprecedented economic uncertainty, David was a steady hand to guide us through these challenges," she said.

"Over these past few years I have come to rely on David's insight, intelligence, and grit as a negotiator, so it is with immense personal appreciation — and a degree of sadness — that I mark his departure from this key diplomatic post."

MacNaughton said he had long planned to leave his job before the October election, and particularly after the Trump administration lifted the steel and aluminum tariffs.

He said he was willing to pass on advice to Trudeau and the Liberals if they called on him for campaign advice.

"I have never been very shy about offering my opinions. So if they are called on, I will offer them."