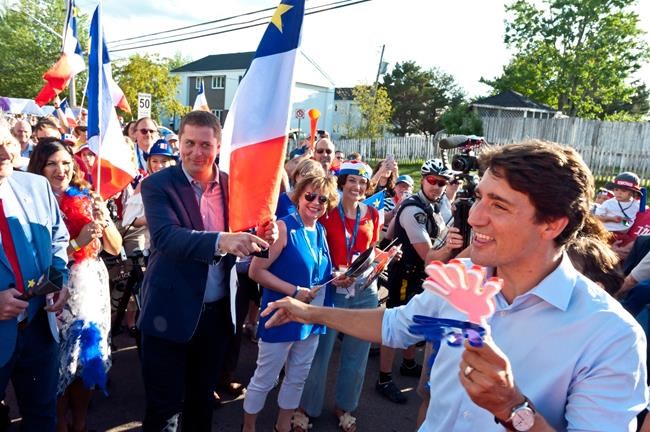 OTTAWA — Federal ethics commissioner Mario Dion says he's willing to testify about his scathing report on Trudeau's handling of the SNC-Lavalin affair — if he's invited to do so by the House of Commons ethics committee.

But there's the rub: the Liberals hold a majority on the 10-member committee and are unlikely to agree to an opposition attempt to keep the SNC-Lavalin controversy in the spotlight as MPs approach the starting gate for the Oct. 21 election.

However, Conservative and NDP members have the numbers to at least force an emergency meeting of the committee on Aug. 21, during which they intend to move a motion to invite Dion and possibly others, including Trudeau himself, to answer questions about Dion's bombshell report.

The report, released Wednesday, concluded that Trudeau violated the Conflict of Interest Act by improperly pressuring former attorney general Jody Wilson-Raybould to halt a criminal prosecution of SNC-Lavalin on corruption charges related to contracts in Libya.

Conservative Leader Andrew Scheer appealed directly Friday to the six Liberal committee members "to do what's right." And he launched a "grassroots" campaign, encouraging Canadians to pressure the Liberal MPs directly to allow a full hearing into Dion's report.

Scheer said Trudeau "betrayed the trust" of Canadians and the Liberal party.

"So it's time for the Liberals on the committee to take a stand. Do what is right and do what Canadians expect of you," Scheer told a news conference during a pre-election swing through New Brunswick.

He reiterated his belief that Dion's report contains enough evidence of misconduct to warrant an RCMP investigation, which Scheer requested last winter. Green party Leader Elizabeth May said later that she too believes an RCMP probe is warranted and, moreover, that Trudeau's handling of the SNC matter constitutes "a resignation offence."

Still, May said in a statement: "It is not for me to demand Mr. Trudeau's resignation. That is a matter for the PM to decide and his decision will tell us far more about him than any denunciation from me or anyone else would."

Wilson-Raybould said Friday that the RCMP has not contacted her since Dion's report was released Wednesday. However, she said in a statement that she was contacted by the Mounties last spring "regarding matters that first came to the public's attention on Feb. 7," a reference to the Globe and Mail article that put the whole saga in motion. She declined further comment on the content of her discussions with the police force.

In her testimony before the justice committee in February, however, Wilson-Raybould said she didn't feel that anything illegal had occurred. On Wednesday, the Mounties issued a statement saying the force is "examining this matter carefully with all available information and will take appropriate actions as required."

If, as expected, Liberal MPs on the committee reject the opposition attempt to keep the controversy boiling with testimony from Dion and others, that will add fuel to opposition charges of a cover-up.

Scheer said Friday he finds it "incomprehensible" that Trudeau is refusing to let the full story come out, pointing to the fact nine witnesses told Dion they couldn't reveal everything they knew about the SNC affair due to cabinet confidentiality.

"We still see evidence to this day that Justin Trudeau is going to great lengths to cover up the full truth from coming out."

Last winter, Trudeau partially waived solicitor-client privilege and cabinet confidentiality to allow the Commons justice committee to hear in-depth testimony from Wilson-Raybould, bureaucrats and senior officials in his office about the former minister's allegation that she'd been relentlessly and improperly pressured to intervene in the SNC-Lavalin matter.

As part of its bid to keep the controversy top of mind with voters, the Conservative party released Friday a video of a brief encounter between Scheer and Trudeau during a street party a day earlier in Dieppe, N.B., to celebrate National Acadian Day.

In it, Trudeau, dressed casually and flapping a noisemaker, calls to "Andrew" and comes through the crowd of revellers to shake his hand. Scheer's words can't be heard clearly, but according to subtitles provided by the party, he tells the prime minister: "You have to stop lying to Canadians. You need to come clean."

Trudeau responds with a jaunty "Oh, this is a good day today," and turns away as Scheer waves a small Acadian flag.

The SNC controversy started last fall when the director of public prosecutions refused to negotiate a remediation agreement with the company, which would have enabled the Montreal engineering giant to avoid a criminal conviction that would result in being barred from receiving federal contracts for 10 years. Trudeau has acknowledged that he and his aides wanted Wilson-Raybould to reconsider her decision not to overrule the public prosecutor but he's insisted they were motivated strictly by a desire to ensure thousands of innocent SNC employees, pensioners and suppliers didn't end up paying the potentially crippling price of a conviction.

In his report, Dion concluded that Trudeau used his position of authority to improperly try to influence a decision that would have benefited SNC-Lavalin's private interests, in contravention of the Conflict of Interest Act.

Trudeau has accepted the report and taken "full responsibility" for what occurred. But he's also said he disagrees with some of Dion's findings and has resolutely refused to apologize for what he terms "standing up for Canadian jobs."