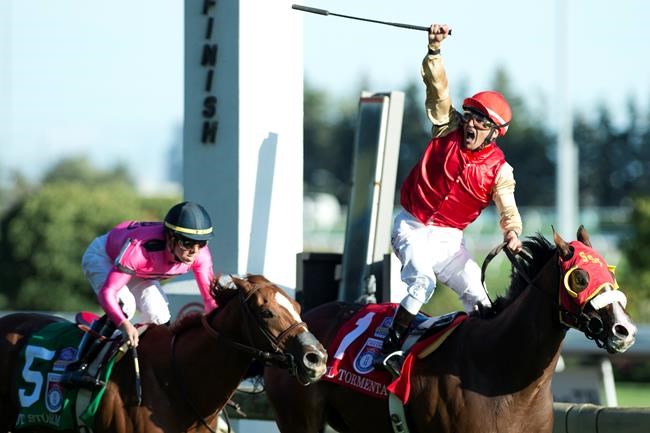 The veteran jockey, who'll retire at season's end, rode the 44/1 longshot to a stunning win in the Grade 1 $1-million Ricoh Woodbine Mile. Da Silva and El Tormenta overtook filly Got Stormy, the 3/2 favourite, and jockey Tyler Gaffalione for the lead down the stretch, then held them off to earn the half-length victory for owner/breeder Sam-Son Farm of Milton, Ont.

The Woodbine Mile was the last major title missing from Da Silva's impressive resume after finishing second in last year's race aboard Mr Havercamp. The 44-year-old Brazilian is a two-time Queen's Plate winner and six times has been named Canada's top rider.

"This was my last shot," he said. "All week I did a lot of mental work just focusing and I'm glad I did.

"I have faith in this horse, I have so much faith in Gail (trainer Gail Cox). Every time she sends a horse here she sends them in the best shape and I knew I was going to have a lot of horse underneath me."

Da Silva is also chasing a sixth Woodbine riders title — he's the leading jockey here in wins and earnings — and fifth straight. But the personable jockey said not even a Woodbine Mile title is enough to make him change his retirement plans.

"No, not really," he said. "Listen, I made this decision for my kids.

"I want to be with my family, I want to have time to be a husband and father. I've been a jockey for 30 years, now it's time for me to be a father and husband."

El Tormenta claimed the $600,000 winner's share and qualified for the Breeders' Cup Mile on Nov. 2 at Santa Anita Park.

Da Silva and El Tormenta were fifth with a quarter-mile to go. But Da Silva moved his horse into second down the stretch behind Got Stormy before surging ahead to earn the victory in 1:32.60 on a good E.P. Taylor turf course.

"My trip was perfect, he was just so focused," Da Silva said. "I knew the room was coming and he just took off from there.

"He gave everything he could."

Got Stormy was second in the 11-horse field. Lucullan finished third, but was disqualified and relegated to fourth, moving French-bred Raging Bull up to third.

The remainder of the field, in order of finish, was: Synchrony; Emmaus; Admiralty Pier; Made You Look; Silent Poet; Awesometank; and American Guru.

Got Stormy had already cemented a Breeders' Cup berth prior to Saturday's race. Gaffalione said his horse held nothing back.

"She ran her heart out, she gave us everything she had," he said. "I'm looking forward to her in the Breeders' Cup, I think she'll be dynamite out there.

"Congratulations to the winner, they ran a big race. It took a nice horse to beat her today."

"I was just hoping he had room to run there," she said. "I just wanted him to have a little bit of space because he's pretty tough and (can) bully his way through.

"He's tough as nails, he's very very competitive and doesn't give up. In some of the other races, even having a poor trip, being yanked back, yanked around, he always runs at the end."

The Woodbine Mile win is indeed a sweet one considering El Tormenta changed his running style the past year from pacesetter to stalker/closer. Prior to Saturday's race, the horse had just one win in six starts since the switch.

And El Tormenta was running a mile for the first time since August 2018. But Saturday's race marked the 11th occasion in his 13 career starts that El Tormenta had run on Woodbine's turf.

"I got to have him in Florida and train him there for a while," Cox said. "I think he's grown up a lot."

The victory was El Tormenta's second in six races this year and the fourth in 12 career starts. The winner's share nearly quadrupled his earnings to over $832,000.

Cox said Sam-Son Farm will take a wait-and-see approach regarding whether to run El Tormenta in the Breeders' Cup.

"I guess we'll get him back to the barn, see how he is and everybody will talk about it," she said. "He's a very easy horse to deal with so he'd travel well."

Nessy, at 23/1 odds, finished second ahead of Focus Group in the six-horse field.