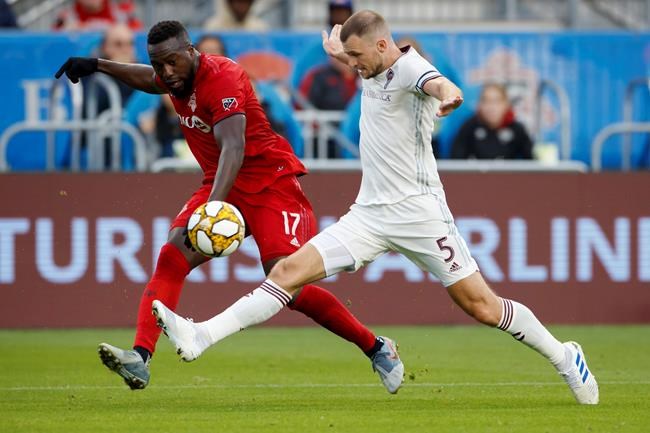 Toronto FC extended its unbeaten streak in all competition to nine games (5-0-4) Sunday with a 3-2 victory over a resilient Colorado side that is proving to be a tough out under former Toronto assistant coach Robin Fraser.

Toronto led 2-0 after just 13 minutes, only to see Colorado claw its way back and tie it up in the 62nd minute. Substitute Jonathan Osorio's 70th-minute goal proved to be the match-winner.

"There's a period at 2-0 where if we're a little sharper, a little more ruthless, if the mentality stays a little stronger, then the game can probably end 3-0, 4-0, 5-0," said captain Michael Bradley. "But if the foot comes off the gas a little bit and you lose your way, then you win 3-2 and nothing comes easy."

Toronto needed them with D.C. United winning at Portland to stay on pace in the race for fourth place — and home-field advantage in the first round of the playoffs — in the East. Both teams have 12-10-9 records but Toronto retains fourth spot on goal difference.

"We are absolutely shooting to start with a home playoff game, without a doubt," Bradley said. "But we also understand that if you get ahead of yourself and you lose your way, then you can be right back in the thick of a real fight very quickly."

"The biggest games are still to come," he added. "And if we want to have something to say in those games, then we've got to keep getting better."

Toronto got some help elsewhere this weekend with the New York Red Bulls losing in Seattle, New England tying Orlando and Montreal beaten by FC Cincinnati.

Osorio and winger Erickson Gallardo made their presence felt off the bench when it counted.

After a Colorado attack fizzled out, Toronto moved back up the field quickly with the speedy Gallardo attacking the penalty box before sending the ball over to Osorio, who right-footed it home for a 3-2 lead.

It was a welcome goal for Osorio, a player who wears his heart on his sleeve and had looked a little glum in recent days with newcomers Nicolas Benezet and Gallardo finding their feet in the midfield.

Toronto coach Vanney called Osorio a player who can turn a game.

"Tonight, when called upon, he helped us out. He did that," said Vanney.

Vanney liked some of what he saw but said his team got a little carried away on offence, with players roving too far afield. He also thought his players were a little too casual on defence once they got the lead.

Both teams arrived in fine form. Toronto's last loss was Aug. 3 when it was beaten 2-0 at the Red Bulls, while Fraser had won three straight since taking charge of the Rapids on Aug 25.

"In the beginning it was really weird. At the middle of the game it was just another game with Toronto," Fraser said of coaching against his old team.

Endoh opened the scoring in the eighth minute, angling his shot off the crossbar after a slick buildup between Richie Laryea and Jozy Altidore.

Pozuelo then made it 2-0 from the penalty spot in the 13th minute after defender Lalas Abubakar was caught with a handful of Altidore's jersey. After video review to see if a red card was warranted (Abubakar was instead yellow-carded), Pozuelo sent a looping penalty down the centre as goalkeeper Clint Irwin dove to a side.

Colorado (10-15-6) pulled one back in the 31st minute after Nicholson raked a low ball across the box. The ball bounced off Bradley and Rosenberry, from close range, drove it between goalkeeper Quentin Westberg's legs.

Westberg stopped Kei Kamara's poorly-placed penalty in the 39th minute. It was redemption for the French-American 'keeper, who had chopped down Nicholson after a long Colorado ball found the Scottish winger behind the defence.

Colorado pulled even in the 62nd minute when Nicholson's looping cross from well outside the box bounced in. Westberg was unable to come out for the well-placed ball as striker Diego Rubio slid towards it.

Toronto had 64.8 per cent possession in the first half but only 48.4 in the second. Colorado oiutshot TFC 15-13 but Toronto had a 7-5 edge in shots on target.

It was also a return home for Irwin, a former Toronto No. 1 'keeper who was traded to the Rapids last December after three seasons with TFC. Irwin continues to deputize for Tim Howard (hamstring).

Toronto raised its home record to 8-1-1 against the Rapids, who have not won at BMO Field since 2014. Colorado did win the 2010 MLS Cup here, however.

Bradley was feted before the game by a giant banner raised in his honour by supporters in the south stand.

"It was incredible," said Bradley, whose future with the club is uncertain given his contract runs out at the end of the year. "Since the day I've got here, I've tried to spill everything I have in to the club, the team and the city.

"Hopefully along the way people have respect for that. I think the relationship I have with a lot of those fans behind that goal is pretty special."

Bradley has opted to keep his contact talks under wraps.

Toronto plays at Montreal on Wednesday in the opening leg of the Canadian Championship final.