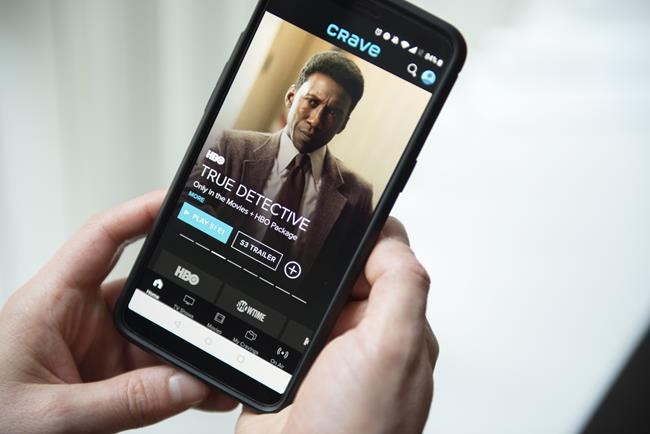 TORONTO — As the battle for TV viewers intensifies, Bell Media says it has struck an agreement for the exclusive Canadian rights of original series made for the upcoming U.S. streaming platform HBO Max.

The pact with Warner Bros., announced Wednesday, will secure a fresh selection of programming to help fortify Bell's Crave streaming brand in an increasingly crowded market when Apple TV Plus and Disney Plus arrive in November.

The deal also confirms that HBO Max isn't headed to Canada as a stand-alone option when it launches stateside next May, a move that would have thrown another streaming competitor into the ring.

For Canadians, the Crave subscription price won't be raised as part of the new agreement, Lennox added.

"We wanted to simplify this convoluted world of so many offerings," Lennox said in an interview with The Canadian Press.

"Disney Plus, Netflix and Amazon are inarguably ubiquitous goliaths — but when you add all this content ... to the already substantial Crave offering, I really do believe we compete on the world stage."

Upcoming titles in the HBO Max deal, which takes effect next year, include a spinoff of "Gossip Girl," DC Comics series "Green Lantern," and "Dune: The Sisterhood," a project from Quebec director Denis Villeneuve that's set in the universe of Frank Herbert's "Dune" novels.

But not everything on HBO Max will be mirrored in Canada. The agreement only covers output from Warner's television production operations.

That means certain TV shows produced by other companies will be excluded, among them Sony's update to the cult animated series "The Boondocks," and "Sesame Street," which has a U.S. deal with HBO Max for both past and upcoming seasons.

Wildly popular 1990s sitcom "Friends" was confirmed to be leaving Netflix for the HBO Max service in the United States, but won't be making that same leap in Canada. And Japanese animated films made by Studio Ghibli, including Oscar winner "Spirited Away," aren't part of the deal either.

Lennox said the selection available through Crave's HBO package more than compensates for the missing programs.

Viewers will have access to HBO titles "Game of Thrones" and "Succession" and Hollywood movies "Green Book" and "Crazy Rich Asians," as well as the basic tier of Crave, which features Showtime's cable programs and classic network TV hits "Seinfeld" and "Big Bang Theory."

Exclusive content has become a valuable asset for all of the major streaming players, who have invested billions of dollars in producing new shows and films to attract more subscribers and retain their current ones.

Netflix heads into the final months of the year with its strongest roster of potential awards contenders yet, including the Martin Scorsese drama "The Irishman" and Scarlett Johansson-starring divorce dramedy "Marriage Story" in an effort to reinforce its dominance. Amazon makes a similar play for accolades with the Adam Driver CIA whistleblower thriller "The Report."

Those films will be trying to wrestle attention away from the star-studded TV lineup debuting Nov. 1 on Apple TV Plus, and the extensive selection of family-oriented programs making their way to Disney Plus on Nov. 12.

Under the HBO Max contract, Bell also renewed its first-run rights for Warner Bros. feature films, which include recent blockbuster hits "Joker" and "It Chapter Two."

Lennox said he is considering experiments that might place some HBO Max series on CTV broadcast channels first, for example, putting "Gossip Girl" on its CTV Life cable channel before it debuts on Crave.

"All roads will lead to Crave," he added.

"But certainly we will use our CTV platform ubiquity — CTV Life, CTV Drama, CTV Comedy — to also have the 'max' portion of the HBO Max content."

Companies in this story: (TSX:BCE)