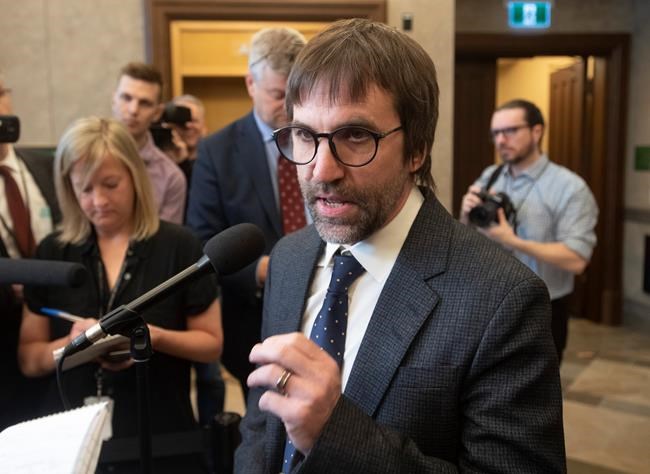 OTTAWA — The minister responsible for overhauling Canada's broadcasting and telecommunications sectors tried to reassure Canadians Monday that the federal government is not preparing to license news outlets.

"Let me be clear. Our government has no intention to impose licensing requirements on news organizations nor will we try to regulate news content," Heritage Minister Steven Guilbeault told reporters at a news conference he called Monday morning. In an interview aired over the weekend, Guilbeault had said the government would ask media outlets to be licensed.

"We are committed to a free and independent press, which is essential to our democracy," the minister said Monday.

"Our focus will be and always has been to ensure that Canadians have access to a diversity of high-quality and credible news sources."

His weekend remarks sparked a social-media firestorm, fanned by the Opposition Conservatives, over the prospect of the government using licensing requirements to censor news.

Guilbeault said he was not referring to news organizations when he spoke about media outlets, but rather about organizations that produce and distribute cultural content.

And he suggested that those questioning his comments might have misunderstood.

"Clearly some people were confused," said the minister.

"I could see that some people were confused about this particular recommendation in the report so I felt it was important to clarify it."

The CTV interview, aired on Sunday, was on a wide-ranging report released last week, which included 97 recommendations aimed at modernizing Canada's antiquated broadcast and telecom laws.

The report, called "Canada's Communications Future: Time To Act," was compiled by a panel of independent broadcast experts and included a recommendation that the Canadian Radio-television and Telecommunications Commission (CRTC) or another regulatory body control licensing of all companies creating "audio, audiovisual, and alphanumeric news content."

During part of the interview, Guilbeault was attempting to differentiate among media outlets and how they would be licensed based on their size when he said, "We would ask that they have a licence, yes."

The comments were quickly scrutinized, with some commentators warning that licensing media outlets would amount to a dangerous attack on the freedom of the press.

Conservative MP Michelle Rempel Garner was among the critics who latched onto the minister's comments, questioning Guilbeault's motives.

In response to his effort at clarification, Rempel Garner said Guilbeault did not walk back his comments far enough, suggesting there is still uncertainty over the Liberal government's plans to revise Canada's broadcasting and telecommunications laws.

"I think the government has to be very clear about one thing: the role of the state is not to interfere in people's right to free speech or the freedom of the press," she said.

"What I am concerned about in what I heard was that there was ambiguity in terms of that particular concept."

The CRTC currently issues licenses to TV and radio broadcasting outlets but does not regulate content on digital outlets such as Google and Facebook, on websites or in print.