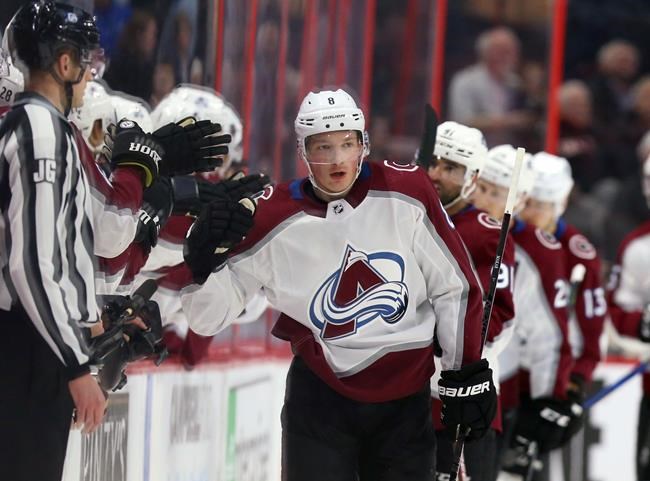 OTTAWA — There’s no denying the Colorado Avalanche are a very good team, but the Ottawa Senators did themselves no favours Thursday night.

The Avalanche, who hadn’t won in Ottawa since Feb. 11, 2016, picked up a 4-1 win with an impressive performance led by Cale Makar who had a goal and an assist.

Ottawa struggled right from the start as they didn’t register their first shot until the 18:41 mark of the first period.

“Not ready to play,” said Ottawa defenceman Dylan DeMelo. “It’s as simple as that. Not engaged, not detailed. The first ten minutes of the game we should probably shoot some pucks on net. When we did that, we had some O-zone time and caused some chaos.”

The frustrating part for DeMelo is that many of the team’s shortcomings could be avoided.

“The things that we could control we’re not doing that,” DeMelo said. “We can control shooting the puck, we can control going through guys and being engaged. If they make some good plays and score you kind of tip your hat to them, but it’s things we can control and we can get better at.”

The Avalanche deserved credit as they came out to play. They blocked shots, had good tracking and controlled the tempo of the game.

“We had a good start,” said Colorado’s Nathan MacKinnon. “I thought we deserved a few more than one in the first…A lot of guys had good games (Thursday).”

Brady Tkachuk scored the lone goal for the Senators (18-25-11), while Marcus Hogberg stopped 30 shots in defeat.

Being in a rebuild year the Senators knew there would be difficult nights and while it can be frustrating, players chose to focus on what could be ahead.

“The team we were playing (Thursday) were kind of in the same position a couple years ago, and now look at them, they’re top three, top five in the league,” said Tkachuk. “It’s good to see how they had a quick turnaround for their rebuild and our team has gotten so much better since the start of the year and we’re going to continue to get better. It was definitely good to see an example out there of an organization and what’s going to happen for us.”

Leading 3-1 to start the third, Compher rounded out the scoring early as he beat Hogberg short side.

Colorado regained the lead early in the second as Nieto buried a one-timer off the rush. Makar then made it 3-1 with a blast from the blueline for his 12th of the season.

The Senators didn’t register a shot until late in the period, but still managed to get out of the period tied 1-1.

“We played harder towards the end of the period,” said Senators coach D.J. Smith. “You saw (Tkachuk) kind of drag some of our guys into that, but they’re too skilled to give that lead to them and when they made it 3-1, they just closed it down for us.”

Colorado opened the scoring at the seven-minute mark after a defensive breakdown by the Senators left Nichushkin all alone in the right circle, before he fooled Hogberg with a wrist shot.

Ottawa finally registered its first shot of the game on its second power play of the night as Tkachuk fired a shot at Grubauer, which earned a cheer from the crowd. Less than a minute later Tkachuk broke in alone and beat Grubauer glove side to tie the game on Ottawa’s third shot.

Notes: Ottawa’s Nick Paul returned to the lineup for the first time since suffering a lower body injury on Jan. 7.

This report by The Canadian Press was first published Feb. 6, 2020.