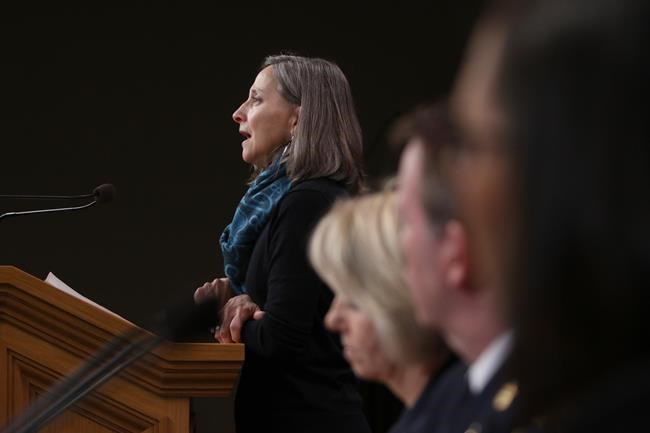 VICTORIA — Overdose deaths linked to illicit drugs dropped by 36 per cent last year in British Columbia compared with 2018 but the death toll remains almost as high as when the province declared a public health emergency over the crisis.

Chief coroner Lisa Lapointe said 981 people died of suspected overdoses in 2019, which represents an average of nearly three deaths a day, with the number is likely to increase as investigations of the deaths conclude.

Of those who fatally overdosed, 747 were men and 234 were women, and they ranged in age from 13 to 76, Lapointe told a news conference Monday.

"The majority of those who died were men in their 30s, 40s and 50s," she said, adding the deaths are taking a toll on grieving families.

Lapointe highlighted the individual cases of four people who died of toxic-drug overdoses, including a 42-year-old woman who died in her home. She'd been diagnosed with mental health and substance use issues.

"She was found deceased in the living room of her home by her child," said Lapointe, adding the woman leaves behind two children and a husband.

Lapointe said a 27-year-old man diagnosed with anxiety and substance use issues was found dead in his bedroom by his father.

"He is survived and missed terribly by his parents and siblings," she said.

Lapointe said every death represents a personal tragedy and a reminder of the impact of the opioid crisis.

"Those who died of drug toxicity this year are more than statistics, they're people," she said. "They were loved. They had hopes, dreams and challenges just like the rest of us. We need to keep focused on the terrible losses we're experiencing in our communities."

The coroners service recorded 991 deaths in 2016, the year the province declared a public health emergency. In 2018, the fatalities climbed to a record annual high of 1,543, with the opioid fentanyl detected in the vast majority of illicit drugs.

She said the BC Coroners Service is joining health officials in renewing calls for improved access to a regulated, safer drug supply.

"The work we are doing around keeping people alive is working," she said. "But this remains a crisis at hand."

Henry released a report last April urging the B.C. government to consider steps toward decriminalization of people for personal use of drugs. She said that could help turn the tide in the epidemic by removing the stigma associated with substance use.

Judy Darcy, the province's minister of mental health and addictions, said that while decriminalization is a federal responsibility, the province has been at the forefront of overdose prevention initiatives.

Those include pilot projects that provide safe drug supplies to substance users, expansion of supervised consumption sites and prevention programs administered by police forces, she told a news conference.

"Our response is bold and pushing the envelope."

Statistics from the ministry show the number of people receiving prescribed opioid substitute treatment increased from 3,500 in July 2017 to 22,872 in December 2019.

The ministry says the distribution of take-home kits of naloxone, a medication to reverse overdoses, increased from 195,696 in 2018 to 232,312 last year.