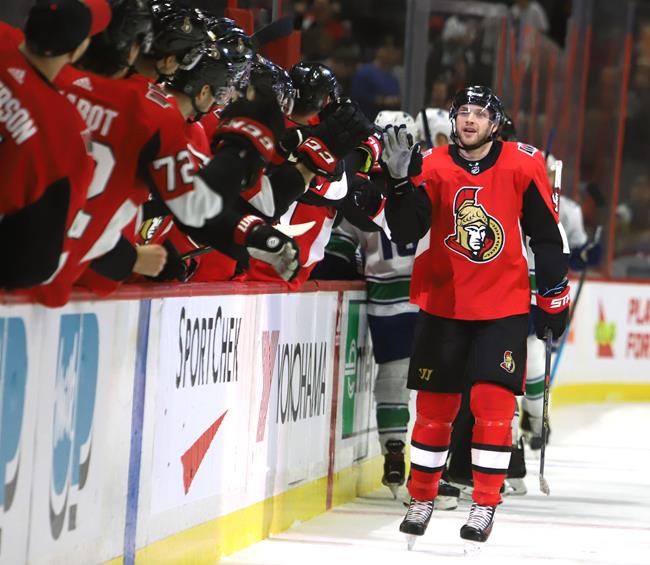 OTTAWA — Bobby Ryan could have never imagined a night like this.

The Ottawa Senators forward played his first home game in over three months and had a hat trick to lead the Senators to a 5-2 win over the Vancouver Canucks on Thursday. Ryan was named the game's first star and processed an array of emotions throughout the night.

Last November the Senators announced Ryan would be leaving the team to enter the NHL/NHLPA assistance program and just last week Ryan admitted he had been battling a problem with alcohol.

The 32-year-old has worked hard to deal with his issues and made his return to the Senators lineup Tuesday night in Nashville, but was looking forward to playing his first game at home.

"I knew Ottawa being the community that it is that the reception would be good," said Ryan. "It just got harder to keep the emotions down throughout the game. It was incredible. They supported me and I got to contribute. You can't write that, the way that went. It was just an incredible evening, so thank you to all of them."

When asked if he believed in hockey gods, Ryan said he didn't think he would have been on their good side considering everything that's gone on in his personal life.

"I guess they granted me some reprieve and gave me a good night," said Ryan.

Ryan credited his wife, Danielle, for helping him get to this point and said she also deserved the first star.

Connor Brown got the Senators on the board midway through the first and Ryan scored his first of the night 31 seconds later.

Fans were quick to cheer Ryan on, giving him a standing ovation and chanting his name.

"You don't know what it's like in someone else's life in their mind and what they go through," said Senators coach D.J. Smith. "His being so public, it's great to see people get behind him and then for him to come out and show his skill set was outstanding."

Vancouver head coach Travis Green also appreciated what Ryan did, even if it was at the expense of the Canucks.

"You don't ever like to lose or see other players score on you, but it was obvious by the reaction of the crowd, and there's still that human element in the game that when guys go through tough things or battle through things," said Green. "It was just good to see him back out there playing."

Marcus Hogberg, who stopped 32 shots, was solid through the second period, but the Canucks finally found a way to beat him with 15 seconds remaining in the period to make it 2-1.

The Ottawa goalie robbed Vancouver throughout the period, including a point blank save on Jay Beagle, but Hogberg was unable to stop J.T Miller's point shot.

Leading 2-1 to open the third, the Senators regained their two-goal lead just 14 seconds in as Ottawa won the opening faceoff to take control offensively.

Rudolfs Balcers scored when he picked up a Chris Tierney rebound. Brown hit the 40-point mark (14 goals and 26 assists) for the first time in his career with an assist on the play.

The Canucks made it a one-goal game again as Tyler Toffoli tipped Miller's point shot midway through the period, but Ryan scored his second of the night with just over two minutes remaining and then added an empty-net goal to complete the hat trick.

"We felt we had some momentum (to start the third)," said Miller. "We still played a really good third period after that, but we've got to find a way to keep that puck out of the net whether it's a bad bounce or not."

Thatcher Demko stopped 20 shots for the Canucks (34-23-6), who missed out on an opportunity to gain ground in the Pacific Division.

Vancouver was playing game two of a four-game road trip (1-1-0), with their next stop in Toronto on Saturday.

This report by The Canadian Press was first published Feb. 27, 2020.

Note to readers: This is a corrected version of an earlier story. It was Bobby Ryan's first home game since entering the assistance program. He had played Tuesday in Nashville.