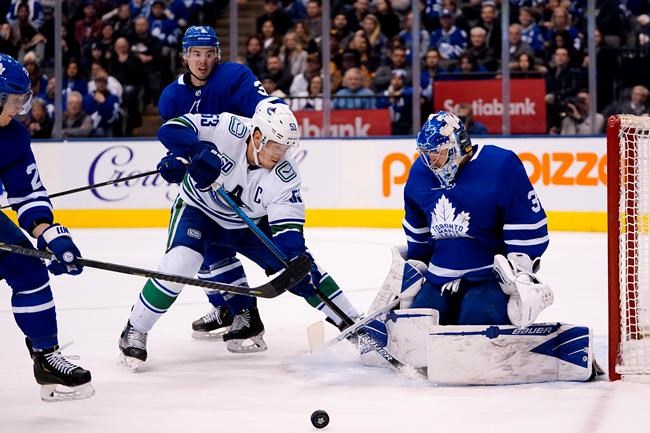 After being the odd-man out on Toronto's blueline more often than not this season, Marincin scored the go-ahead goal early in the third period as the Maple Leafs hung on to beat the Vancouver Canucks 4-2 on Saturday.

Marincin entered the night with four career goals in 223 games before potting just his second since 2016-17 to help Toronto go up five points on the Florida Panthers for third in the Atlantic Division.

Leafs coach Sheldon Keefe, who also coached Marincin with the American Hockey League's Toronto Marlies, wasn't as surprised as many in the Scotiabank Arena to see him score.

"Got to love the initiative of Marty to finish it," said Keefe. "He takes a lot of heat around here, up and down (to the minors) but when you call upon him he gives you everything he has and it's all you can ask for."

The Maple Leafs (35-23-8) won four-of-five contests to close out February.

The Canucks (34-24-6) entered six points behind the first-place Vegas Golden Knights in the Pacific and failed to create any space ahead of the teams chasing them in a tight Western Conference.

"We're still good in standings but we got to win games, got to get points," said Canucks star Elias Pettersson, who was held scoreless with no shots on net in 21 minutes of ice time.

Both goalies had rough starts by combining to allow four goals on seven shots in the first 11 minutes of the game before settling in to turn away the following 48-of-49.

Frederik Andersen made his seventh straight start for Toronto and stopped 25 shots. Vancouver's Thatcher Demko, in net for an injured Jacob Markstrom, finished with 26 saves.

"Just regroup and focus on what's next," Andersen said about the poor start. "Doesn't matter what happened. It's the next shot, all I can focus on."

Frederik Gauthier opened the scoring less than three minutes into the game on Toronto's first shot before Tyler Motte responded for Vancouver at 5:28 after a strong forecheck.

Auston Matthews restored the lead for the Leafs only 57 seconds later, but Tanner Pearson drew the Canucks even again with 8:58 to go in the first, and the teams went into first intermission tied 2-2.

Matthews now sits second behind Boston Bruins forward David Pastrnak (47) in the race for the Rocket Richard Trophy as the league's top goal scorer after producing his 45th of the campaign.

After a scoreless second period, Marincin produced the go-ahead goal only 18 seconds into the third when he grabbed his own rebound off the end boards and beat Demko glove side.

"It's not every night you see a guy who's six-foot-five who plays a shutdown role do something like that," said Matthews.

"I've seen it before, yeah. You don't see it often, but when he brings it out it's usually a treat."

Andersen made his biggest stop of the night with 4:50 to go in the game when he got a pad down on J.T. Miller off a rebound to keep his team ahead.

"We played a good road game, battled back," said Green. "Bit of an unlucky goal, the third one. And it was a good response from our team coming into a tough building against a good team. Quite easily could have gone the other way."

Hyman, with his career-high 21st goal of the season, followed soon after with an empty-netter to seal the win.

"They call him the Sidney Crosby of 6-on-5," joked Matthews.

This report by The Canadian Press was first published Feb. 29, 2020