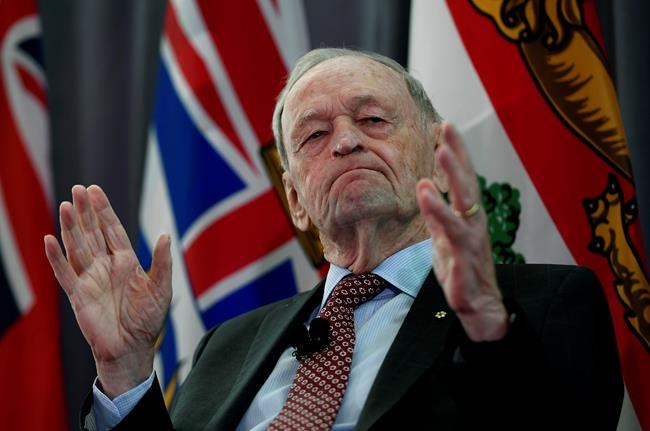 OTTAWA — Jean Chretien scoffs at the notion that Indigenous protests and western alienation are a threat to Canada's national unity.

The former Liberal prime minister said Tuesday that Canada has suffered worse threats in the past and has always managed to survive.

He recalled the 1960s and 70s, when radical separatists with the Front de liberation du Quebec (FLQ) were setting off bombs, kidnapped the British trade commissioner and killed a Quebec cabinet minister.

"That is a few years ago and we're still together, more united than ever," Chretien told reporters after reminiscing about his 40-year career in federal politics at an Ottawa conference focused on his decade as prime minister.

Some politicians and pundits have lately been arguing that Canada is broken, unable to reconcile the land rights of Indigenous Peoples and the need to fight climate change with the economic benefits of developing natural resources.

Those competing demands have collided over the past few weeks as blockades popped up across the country in support of the Wet'suwet'en hereditary chiefs fighting a natural gas pipeline in northern B.C.

The barricades, one of which remains south of Montreal, paralyzed train traffic and damaged the economy.

But Chretien, who served as Indian Affairs minister for more than six years under Pierre Elliott Trudeau, said there have been periodic protests by Indigenous Peoples for decades and they've all been resolved one way or another.

"Do you think that this problem will break the nation?" Chretien asked and then answered. "No. Because Canada is stronger than that. We always face a problem and resolve them ... Don't have an inferiority complex."

He urged a questioner to "relax" and put the recent protests in perspective.

"You're young, you will see a lot of problems until you get my age," the 86-year-old said.

During his time as Indian Affairs minister, Chretien and the elder Trudeau faced major backlash for a 1969 policy proposal, known as the White Paper, that called for abolishing the Indian Act and eliminating Indian status, among other measures. The Liberal government of the day withdrew the proposal the following year.

The anti-pipeline blockades have added to frustration in Alberta, where many blame the Trudeau government's environmental policies for the province's inability to get its crude oil to coastal waters for export overseas.

That was compounded by Teck Resources' recent decision to scrap plans for a new oilsands mine in Alberta, citing the unresolved conflict between climate change policy and resource development.

Talk of Alberta separating from Canada has escalated since Justin Trudeau's Liberals were re-elected last fall but Chretien said such talk makes no sense.

"The separation of Alberta will not take them closer to the Pacific. They will still be having (to build) the pipeline to go through B.C. or United States or the North and so on."

While Chretien exuded confidence in Canada's ability to weather storms, he wasn't quite so optimistic about the rest of the world.

During the conference, he bemoaned the fact that democracy is "receding" in countries around the globe, including Hungary, Poland, Turkey and the United States. And he deplored the growth of "false news" and the impression that "the truth doesn't matter anymore."

Chretien said it's "troubling" that media in the U.S. have documented many instances in which President Donald Trump has lied and yet "there is not a ripple in the river."

This report by The Canadian Press was first published March 3, 2020.