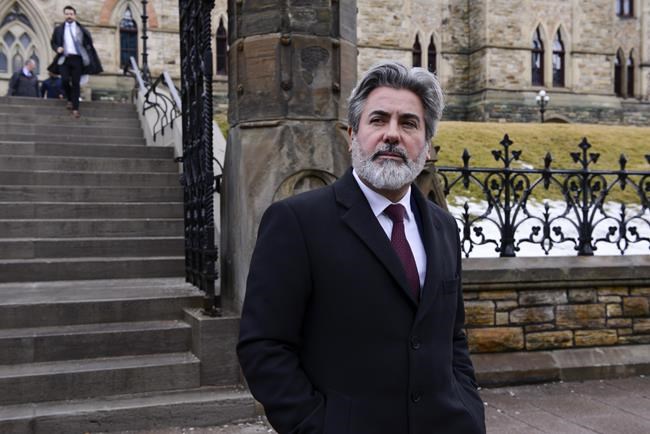 OTTAWA — Pablo Rodriguez looks back wistfully to the time when his biggest worry was whether he'd be able to corral the support of at least one opposition party for the minority Liberal government's initiatives and help it survive confidence votes.

The trials of being the government's House leader in a minority Parliament now pale in comparison to the challenge of ensuring all parties — indeed, every single MP in the House of Commons — will give the unanimous consent needed to fast-track billions in financial aid to help Canadians survive the deadly COVID-19 pandemic.

"I remember when I first got the job, I said, 'Oh man, this is going to be tough, you always need the support of one party to pass legislation,'" recalls Rodriguez, who took on the House leader role after last fall's election reduced Justin Trudeau's Liberals to a minority.

"But that was nothing! Today, I need the support of ev-er-y party to get the legislation passed. Everyone."

The unprecedented crisis has, in theory, given all opposition parties, even the three-member Greens who aren't big enough to be recognized as an official party in the Commons, unparalleled power to shape the government's agenda and re-write legislation more to their liking.

Rodriguez, who says he's spent 15-hour days on the phone negotiating details of three different emergency aid bills with his opposition counterparts, insists that's the way it should be.

But the opposition parties' power is tempered by the very magnitude of the crisis, which has shut down the economy, leaving millions of out-of-work Canadians and shuttered businesses desperate for immediate help to stay afloat. No opposition party wants to be blamed for standing in the way of urgently needed assistance.

As a result, the Conservatives, Bloc Quebecois, New Democrats and Greens have all been trying different approaches and championing various causes in a bid to remain relevant and make their mark on emergency legislation, without ultimately holding it up. And they have different levels of satisfaction about how it's working out.

Conservative House Leader Candice Bergen says her party approached the negotiations on the first emergency bill "in good faith, knowing that we had to get things done quickly for the good of the country."

But an initial draft of the legislation shared with opposition parties included "an unbelievable power grab" — provisions that were immediately scrapped but which would have given the government sweeping powers to unilaterally spend, borrow and change taxation levels without Parliament’s approval for the 21 months — and that set the tone for subsequent negotiations, she says.

Still, the Conservatives claim credit for persuading the government to increase its initial 10 per cent wage subsidy to 75 per cent (a credit also claimed by other parties), as well as for inserting measures to link available jobs with recipients of the student emergency benefit and other improvements to the bills.

But they failed to persuade other opposition parties, much less the Liberals, of the need for multiple in-person sittings of the Commons each week during the pandemic and that, Bergen believes, has prevented Parliament from doing its job of holding the government to account.

"I cannot say that, 'Well, this is the cards we've been dealt and it's working out all right.' I really don't think so. I think it could it have been better if we'd been given more opportunity and we were included more and able to do our job as Opposition," she says.

But the other opposition parties are making the most of the government's willingness to collaborate and hailing the improvements they've been able to make to legislation, even if they didn't get everything they wanted.

"The Bloc Quebecois has always negotiated in collaboration with the government in order to obtain gains for Quebecois," says Alain Therrien, the party's House leader.

He credits the Bloc with ensuring employment incentives were included in the Canada Emergency Response Benefit and for pushing for additional support for seniors, through an increase in the old age pension. The government has promised more help for seniors is coming but has not yet delivered.

NDP House Leader Peter Julian notes that his party has been pushing the government to provide a universal benefit so that all Canadians who need help will get it. The Liberals have "made it very clear under no circumstances will they consider" the idea so New Democrats have contented themselves with trying to fill some of the gaps bit by bit.

For instance, Julian says the NDP this week persuaded the government to hike the monthly benefit for students with dependents or disabilities to $2,000, from the proposed $1,750.

"We're getting changes and improvements and millions of people are benefiting that weren't part of the original government plan," he says.

Julian also credits the NDP with pushing the idea of holding virtual sittings of the House of Commons, with the aim of giving themselves a forum to tell the stories of their constituents who've been left out of the emergency aid programs so far.

"When it's about the people, it's not about yourself, you're going to get a lot further."

Since the start of the crisis in mid-March, Elizabeth May, the Greens' parliamentary leader, says she has never seen such collaboration or willingness to admit mistakes and accept opposition recommendations. She says there has been "an extraordinary number of behind-the-scenes phone calls," including daily briefings provided to all MPs during which they can question government officials.

"I think this is Parliament working better because we've scaled back the partisanship and we're looking at bills before they're tabled for first reading and then we're saying, 'Well, that won't fly,'" she says.

May bridles, however, at the attempts by other parties to claim credit for improvements that she says, more often than not, were pushed by all opposition parties, as well as by a lot of backbench Liberals.

"People who are still trying to score points and take partisan jabs I think are tone deaf to our circumstances and the public will see that they're not helpful, they're in the way."

This report by The Canadian Press was first published May 2, 2020.

—with files from Laura Osman.