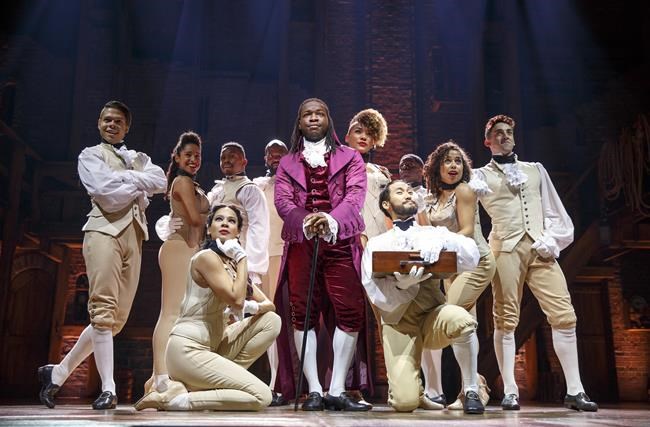 TORONTO — Mirvish Productions says it expects "Hamilton" will return to Toronto after the much-hyped musical's Canadian run was cut short because of the COVID-19 pandemic.

The theatre company sent an email to ticket-holders who requested refunds for cancelled performances Thursday asking them to reconsider, offering priority access to seats should the production resume at a yet-to-be-determined date.

Mirvish says they're aiming to bring "Hamilton" back to the stage within 18 months, and while the schedule is still in flux, producers intend to restart the show "at their earliest convenience."

It says this timeline will depend on getting the green light from public health officials that it's safe for audiences, performers and staff to return to the theatre.

Mirvish's director of sales and marketing says the offer in the email, which was obtained by The Canadian Press, only applies to a "closed group of people."

John Karastamatis says Mirvish has "no details to share with the public," because no dates have been confirmed.

"Remember, this is all dependent on having a safe and healthy world in which theatres would be allowed to reopen. We don't have that yet, and we have no idea when that will happen," Karastamatis said in an email.

"Hamilton'' was scheduled to play 112 shows at Toronto's Ed Mirvish Theatre from Feb. 11 to May 17, 2020. It had mounted just 37 of those performances when COVID-19 forced restrictions on large gatherings, with its last show running March 13.