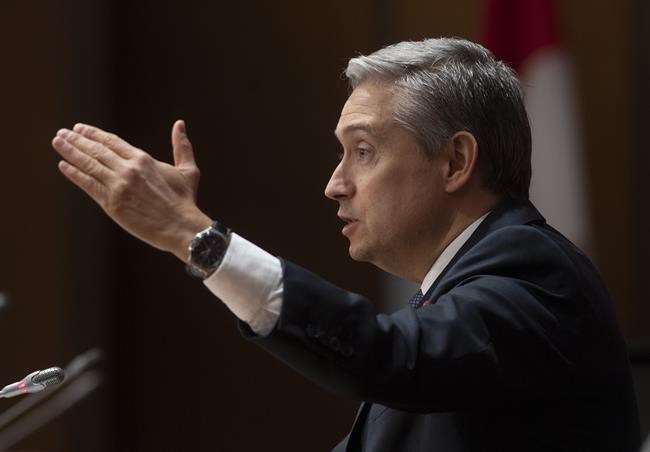 OTTAWA — Canada is pushing back at critics of its bid for a seat on the United Nations Security Council, including the Swedish teenage climate activist Greta Thunberg and a pro-Palestinian coalition that opposes Israel.

Thunberg, as part of group of youth activists and climate scientists, as well as the pro-Palestinian group, the Just Peace Advocates, have sent thousands of letters to the 193 permanent missions to the United Nations opposing the Canadian candidacy for a two-year temporary set on the council.

Separately, they argue that Canada hasn't done enough to combat climate change, and that it has a Middle East policy that favours Israel at the expense of the Palestinians.

Marc-Andre Blanchard, Canada's ambassador to the UN, said Canada is well-entrenched as a global leader on climate change, and most foreign diplomats understand that it is a tough issue that poses challenges for all countries.

Blanchard said he respects the dissent being expressed on both issues because "we live in a democracy" but Canada has a strong case to make for the council on climate change, global security, gender issues and rebuilding a more economically fair and equitable world after the COVID-19 pandemic.

He said most countries — including Gulf and Arab states — understand Canada has an even-handed and long-standing approach to the Middle East that includes the need for a two-state solution, no new Israeli settlements on the West Bank, and future negotiation to determine the status of Jerusalem.

"The member states appreciate the clarity of our position. They also appreciate the way Canada has been expressing it," Blanchard said Thursday in a telephone interview from New York.

"Each country makes its voting decision on many, many issues. Very few countries will make their decision on a single issue."

Canada is competing against Norway and Ireland for two available seats for a term starting next year in a secret ballot, the first round of which begins Wednesday.

Foreign Affairs Minister Francois-Philippe Champagne is bound for New York City this weekend where he will join the final push for Canada's campaign for a seat on the council.

The extra behind-the-scenes politicking will unfold in the face of the higher-profile opposition that has emerged from Thunberg and on the Middle East question.

Thunberg, 17, is the lead signatory on a letter to the UN ambassadors for small island states undercutting both Canada and Norway because they allow oil and gas exploration at a time when fossil fuels are heating up the earth and speeding climate change.

Blanchard suggested that other ambassadors understand that oil-producing nations are doing their best in the face of internal political issues around energy.

"As one ambassador put it to me once, our voice is credible largely because the world recognizes that Canada is also ... having some challenges like many, many other countries in the world, to meet the ambition that is needed to actually fight climate change," said Blanchard.

Independent Sen. Peter Boehm, who has campaigned for Canada among small island states in the South Pacific, said those countries appreciate how Canada has trained their bureaucrats to write applications for funding from the World Bank and other institutions so they can plan to move their populations when the ocean subsumes their land.

He pointed to Thursday's announcement by Canada of a $9.5 million contribution to the Climate Finance Access Network, that aims to help "climate-vulnerable countries" including Pacific small island developing states.

"There are always letters that are written, and Greta Thunberg is obviously a very influential voice. But at the end of the day, an election like this comes down to state interests," Boehm said in an interview.

"Some of these countries have plans underway as to where to move the population when the country, in fact, disappears in the next 10 years or so," he added.

"It's this below-the-waterline — to use an unfortunate comparison — activity that a lot of people don't notice. That includes the letter writers."

Blanchard wrote his own letter this week to UN ambassadors rebutting the 1,000-plus letters sent by the Just Peace Advocates to UN diplomats that said Canada was unworthy of its seat because it is pro-Israeli and anti-Palestinian. The group includes 100 organizations and dozens of prominent individuals, including American philosopher Noam Chomsky, Pink Floyd co-founder Roger Waters and Canadian musician Bruce Cockburn.

"Canada is concerned that the letter contains significant inaccuracies and mischaracterizes Canada's long-standing policy positions. Canada has long supported the creation of a Palestinian state, living side by side in peace and security with Israel," Blanchard's letter says.

"Canada views any unilateral annexation (by Israel) of parts of the West Bank as contrary to international law."

Asked why he wrote the letter, Blanchard said: "There was an occasion to reiterate our position a few days before the vote and ensure that if there was any question, everything would be clear."

This report by The Canadian Press was first published June 12, 2020.