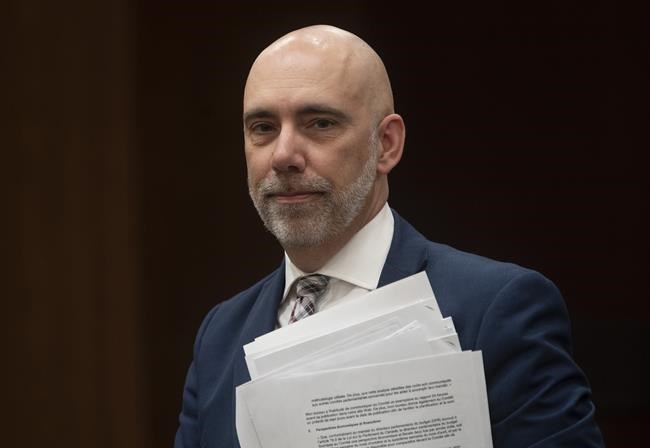 OTTAWA — The parliamentary budget officer says in a new report that this year's federal deficit could hit $256 billion due to the COVID-19 pandemic.

The result, posted this morning, is the combination of an estimated total of $169 billion in federal spending on emergency aid and a historic drop in economic output.

The budget office estimates the economy could shrink by 6.8 per cent in 2020, the weakest showing since 1981 and double the record of 3.2 per cent shrinkage in 1982.

The overall deficit figure is only $3.8 billion higher than budget officer Yves Giroux's previous predictions, which his report says is due to a better economic outlook in the second half of the year that offsets some new spending.

Previously, Giroux estimated the economy could shrink by 12 per cent in 2020.

Giroux stresses that the figures are the outcome of one of many possible scenarios and not a certain forecast.

The report comes one day after Prime Minister Justin Trudeau promised to deliver a "snapshot" of federal finances on July 8 that will provide short-term spending estimates.

Trudeau warned the document won't provide a longer-term outlook because of what the government says is the uncertainty about where the economy will go in the coming months and years — all of which rests on the path of the pandemic.

The Liberals have been under pressure from opposition parties to release a fiscal update or a budget that was shelved due to the pandemic. The government had originally planned to release a budget in late March.

Since then, MPs have approved emergency spending to provide aid to Canadians who have lost their jobs or had their hours slashed, and financing to businesses shuttered due to public health restrictions.

Giroux is also releasing updated cost estimates for two of the cornerstone programs the Liberals rolled out and are now revamping — the Canada Emergency Response Benefit, and the federal wage-subsidy program.

The budget office now estimates the $2,000-a-month CERB will cost the government $61.1 billion, but pull in $7.7 billion when recipients are taxed on the income next year.

The Liberals have promised to extend the benefits so recipients can receive 24 weeks instead of the current 16, and previously revised the budget for the program to $60 billion.

When the Finance Department increased the cost of the CERB, it also lowered the cost for the wage-subsidy program from to $45 billion from $73 billion based on the take-up rate among businesses.

This report by The Canadian Press was first published June 18, 2020.