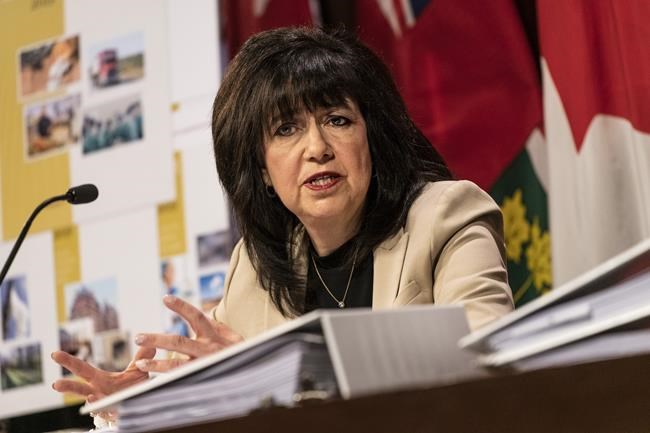 In a special report, Bonnie Lysyk said the $200 million estimate given by the governing Progressive Conservatives in 2018 represented the cost of providing services to all refugee claimants, not just so-called "irregular" border crossers.

She said the minister of social services at the time, Lisa MacLeod, was given inaccurate information by civil servants.

"The accuracy of information provided by the ministry to the minister for the public announcement was far off the mark," Lysyk said in a statement Wednesday.

"Senior government officials need to ensure the accuracy of the information provided to government for public announcements and decision-making."

MacLeod had formally requested $200 million from Ottawa to cover costs she said were incurred by the province and its municipalities as a result of an influx of asylum seekers arriving from the U.S.

Lysyk said her office found the Ontario government spent roughly $81 million on services for irregular asylum seekers between April 1, 2017 — when the federal government first started tracking their arrival — and July 31, 2018.

More costs were incurred until the border was closed due to the COVID-19 pandemic, Lysyk said.

She recommended Ontario seek an immigration agreement with the federal government that includes compensation for providing services to refugee claimants, including irregular border crossers.

The current deal does not, and the federal government has given $15.6 million in compensation to Toronto, Ottawa and Peel Region for their expenses during the April 2017 to August 2018 period, she said.

Quebec, which has a separate cost-sharing agreement with Ottawa, incurred $300 million in costs and has received $286 million in compensation, Lysyk said.

When asked about the report Wednesday, Premier Doug Ford said his government did not intentionally mislead the public and was simply relying on the information provided.

Ford blamed the federal government for leaving the province to shoulder the costs of what he called "illegal immigration," and suggested the auditor general should do another report to examine more recent expenses related to the issue.

"The auditor general's report makes clear that the claims Doug Ford and Lisa MacLeod made about the cost of accommodating asylum seekers in Ontario were pure fiction," NDP Leader Andrea Horwath said in a statement.

"Shame on them for making stuff up to fan the flames of division instead of uniting us like they should have been."

Ford previously came under fire for saying his government inherited a $15 billion deficit from the Liberals, and later revising that number down by about half, to $7.4 billion.

Green Party Leader Mike Schreiner said the debate over the costs of services for irregular border crossers took place at a time when many governments were "playing politics with immigration."

"The government inflated this number ... to provide cover for what in this case is a divisive political agenda, which I think was to question immigration policy in this country. And I think it's wrong," he said.

Canada's Safe Third Country agreement with the U.S. says asylum seekers are required to make their claims in the first "safe" country where they arrive, which means those who try to enter Canada at an official land crossing are sent back to make their claim in the U.S.

The agreement does not cover those who come in through unofficial crossings, known as "irregular" asylum seekers.

The auditor says 36 per cent of refugee claimants in Ontario in recent years entered at unofficial points.

Federal data show 26,415 asylum claims were filed in Ontario in 2019, which could include some filed by irregular border crossers.

The province provides services such as temporary housing, settlement services and language training.

This report by The Canadian Press was first published on July 8, 2020.