Prepare for remote voting in House of Commons this fall: committee 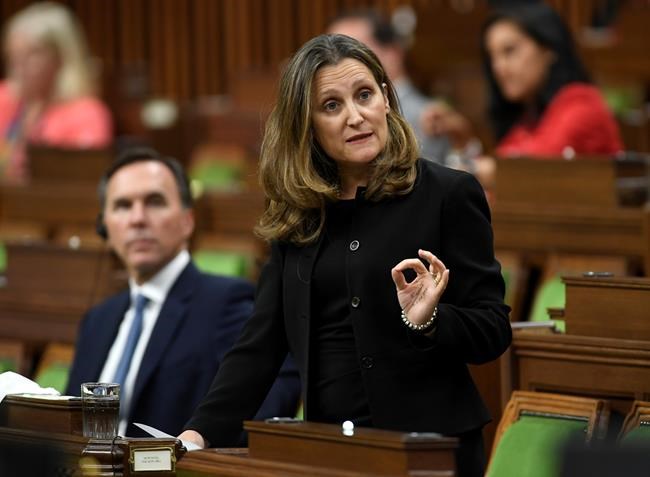 OTTAWA — The parliamentary committee that oversees the way the House of Commons works says the chamber should spend the summer getting ready for MPs to participate and vote from outside Ottawa.

The group said in a report released Tuesday that COVID-19 will likely make it too dangerous for MPs to gather in large numbers when the Commons is due to resume its regular business in September, especially for those who need to travel long distances.

The committee wants to take the videoconferencing system MPs have been using for meetings for the last several months and add a secure voting system, so more normal business can go on, with some MPs physically in Parliament and some not.

Since the House of Commons broke up as the COVID-19 pandemic hit Canada in March, it's used two main meeting formats.

One is a special COVID-19 committee that meets in the Commons chamber, where any MP can participate including by videoconference; that committee can debate but it can't pass legislation.

The other is occasional sittings of the House of Commons with very limited numbers of MPs. In those meetings, including two of them this week, MPs can pass legislation but only those in the chamber can participate.

The committee's recommendation is essentially to fuse them, so MPs can participate virtually and hold meaningful votes.

Creating that voting mechanism will mean "an iterative approach including multiple rounds of testing, demonstrations and adaptations," so that by the time September sittings come around, MPs are comfortable with the technology and everyone is confident it's safe to use.

The committee also says every MP and anyone else participating must be equipped with high-quality audio gear so they can be heard properly.

And the Commons will need to invest in its interpretation service because the people who do that work have been burning out trying to translate fast-talking MPs with poor internet connections.

As for those poor internet connections, which are most likely to plague MPs representing more remote rural areas, the committee says the House of Commons should do what's necessary to fix them.

The Conservatives dissented from the committee's recommendations, saying it's better for a limited number of MPs to gather in Ottawa in person and avoid travelling while COVID-19 remains a worry.

"Of course, we recognize the COVID-19 pandemic requires us to change our routines," their contrary report reads. "However, the underlying currents, during this study, heading toward a remote voting app made us question, again, if 'a crisis was not being left to go to waste.'"

They say the House of Commons would work better under an agreement to have a maximum of 86 MPs in the chamber at once, which is as many as could fit while keeping two-metre distances among them.

If their fellow MPs do adopt the committee's recommendations, the Tories say they should expire automatically at the end of December unless there's a vote to renew them.

This report by The Canadian Press was first published July 21, 2020.