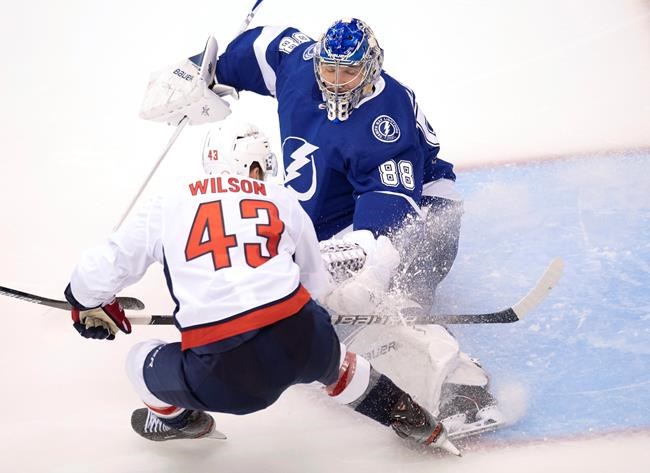 TORONTO — Nikita Kucherov scored a goal in the first period and the winner in the shootout to help the Tampa Bay Lightning beat the Washington Capitals 3-2 on Monday in Eastern Conference round-robin play.

The teams played 5 minutes of 3-on-3 overtime before going to a shootout because the games for seeding follow regular-season rules. Tampa Bay's win puts it in a tie with Philadelphia at two points apiece in the Eastern Conference race, while Washington is third with one and Boston fourth with zero.

“All around, I thought that was a playoff game,” Lightning winger Patrick Maroon said. “Obviously we’re trying to get as many points as we can to seed ourselves in a good position.”

Tampa Bay goaltender Andrei Vasilevskiy stopped two of the three Capitals players he faced in the shootout after making 31 saves in regulation and overtime.

Before OT, Capitals winger Tom Wilson and Lightning Anthony Cirelli exchanged some words and shoves at the third-period buzzer. These teams can't meet again until at least the second round, if not the East final.

“We were in their face,” Maroon said. “That was the kind of team we need to be, just to have the mentality to push back and not let them run around.”

After Kucherov's goal opened the scoring, Mitchell Stephens made it 2-0 Lightning in the second. The Capitals follow their regular-season blueprint by digging out of a hole and tying it on goals by Richard Panik and Evgeny Kuznetsov before intermission.

“We were down 2-0 and we came back, so we showed our character,” Panik said. “Just from now on bring the ‘A' game, bring our physicality and I think we’re going to be good.”

Captain Alex Ovechkin played over 21 minutes and put three shots on net. Asked how he felt, this season's co-Rocket Richard Trophy winner put the focus on his team and what's ahead.

“We know we can play better,” Ovechkin said. “It's kind of a wake-up call. That’s why we play those three games. Every game is going to be much harder and harder.”

NOTES: Lightning captain Steven Stamkos missed the game as expected while recovering from a setback from core muscle surgery. Coach Jon Cooper said Stamkos playing in the first round-robin game was never the plan. ... The Capitals held out Norris Trophy finalist John Carlson as a precaution after he got tangled up with an opponent and went down awkwardly during their exhibition game last week.

Capitals: Face the Flyers, who beat the Bruins in the round-robin opener, on Thursday.