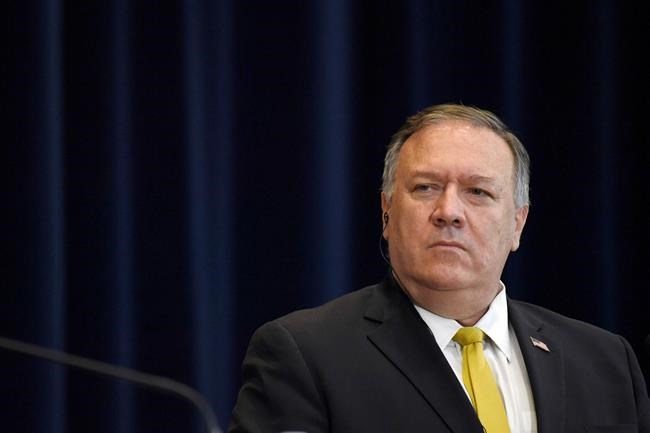 WASHINGTON — The House Foreign Affairs Committee is moving to hold Secretary of State Mike Pompeo in contempt after he has repeatedly rejected the committee’s subpoenas for records related to Ukraine that the department has turned over to the Republican-led Senate.

House Foreign Affairs Committee Chairman Eliot Engel, D-N.Y., said Friday that the panel will prepare a contempt resolution because of what he called Pompeo’s “unprecedented record of obstruction and defiance of the House’s oversight authority.” The House has asked for the same documents that the State Department has turned over for a Senate investigation into Democrat Joe Biden’s son, Hunter Biden, and his activities in Ukraine, but Pompeo has refused to provide them.

In a letter to Engel this week, the department said Pompeo would turn over the documents if the House panel was investigating, like the Senate, “identical or very similar corruption issues involving Ukraine and corrupt influence related to U.S. foreign policy.” Democrats have said they believe that investigation by the Senate Homeland and Governmental Affairs Committee is a politically motivated, election-year probe that is aiding Russia’s attempts to sow chaos in American democracy and spreading Russian disinformation.

The department reiterated that position Friday after Engel said he would pursue contempt, saying in a statement that they would provide the materials “with the only condition being that he send a letter explaining what foreign policy issue he is investigating that requires these documents.”

The committee’s contempt resolution will also cite Pompeo’s refusal to comply with a subpoena issued during the House impeachment inquiry last year. The House impeached President Donald Trump in December — and the Senate acquitted him in February — for his pressure on Ukraine to investigate Hunter Biden as Joe Biden was running for the Democratic nomination to challenge Trump. The president and his associates asked Ukraine for the probes as he was withholding military aid to the country.

“Mr. Pompeo is demanding that the committee do essentially the same thing Russia is doing, according the Office of the Director of National Intelligence: ‘spreading claims about corruption’ in order to ‘interfere in the American presidential election,’” Engel said. “In other words, Pompeo will give the committee what we were seeking if we join in a smear of the president’s political rival. Sound familiar?”

The contempt resolution is the latest — and likely futile — attempt by the Democrat-led House to pressure Trump’s administration into complying with requests for testimony and information on a wide range of issues. While congressional subpoenas are legally binding, officials who have rebuffed Congress have faced little consequence for defying them, while Trump has fired or demoted federal employees who have complied with requests individually.

Contempt itself is largely a symbolic gesture that has generally been used to embarrass officials who refuse congressional requests, and Democratic attempts to legally fight the administration’s refusals have been drawn out in lengthy court battles.

The State Department has also defied subpoenas in the committee's investigation of Trump's firing of the department's inspector general, Steve Linick, which Democrats have alleged came in retaliation for probes of Pompeo that the watchdog was conducting. Pompeo has denied knowledge of any investigation into his own conduct.

Pompeo and his aides have said all of the House subpoenas are politically motivated, without merit, and unnecessary as the information and testimony could be otherwise obtained. The department said the committee had not shown that its demand on the Ukraine documents was for a legitimate legislative purpose and suggested that it was entirely partisan.

Meanwhile, the chairman of the Senate homeland panel, Wisconsin Sen. Ron Johnson, has said his Ukraine investigation is rooted in facts and has called the idea he is pushing foreign propaganda “completely false.” He says he hopes to get a report out by Election Day.

Pompeo has also faced criticism for making a speech at this week’s Republican National Convention. The address was condemned by Democrats and others as an inappropriate breach of decades of diplomatic precedent and a possible violation of federal law prohibiting executive branch employees from overt political activism while on duty.