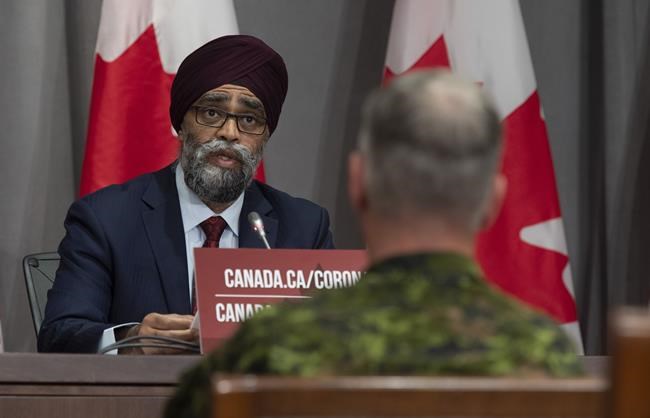 OTTAWA — Defence Minister Harjit Sajjan says hundreds of billions of dollars in planned spending for the military over the next two decades is "secure" despite the ballooning federal deficit to deal with COVID-19.

Fears have been rising in defence circles that the Liberals will look to the military's budget to rein in what is now projected to be a $343-billion deficit this year alone as the government keeps spending to help Canadians with the pandemic.

Those fears are based on past experience as the Canadian Armed Forces was hit by deep cuts when Ottawa struggled to balance the books during the 1990s and again in the early 2010s after the last economic downturn.

But Sajjan says the government has no intention of abandoning its defence strategy, unveiled in 2017 and known as Strong, Secure, Engaged (SSE), which included a plan to spend $553 billion on the military over 20 years. Much of that is to buy new equipment such as jets and warships.

"As we look into the future, we're not just going make a knee-jerk decision on where we're going," he said in an interview with The Canadian Press on the sidelines of this week's federal cabinet retreat.

"We're going do a very thorough analysis, just like we did in the past, make a good case about it and then make a decision of where we want to go. But absolutely, the SSE funding is secure. … We're continuing on with SSE investments."

Sajjan argued that the pandemic, along with the growing number of natural disasters in Canada in recent years and mounting instability abroad, underscore the need for a strong Canadian Armed Forces more now than ever.

At the same time, he suggested money spent on the Canadian Armed Forces should be considered an investment in both the military and the economy, given the industrial benefits associated with building new ships, armoured vehicles and aircraft.

"If you just look at our national shipbuilding strategy, we know dollar for dollar, that money goes into our economy," he said, adding that it would involve creating jobs across the country.

Sajjan did indicate there may be "adjustments" to the Liberals' defence plan. While he didn't offer much detail, the minister suggested the Liberals have been looking at ways to speed up spending on the military during the pandemic because of the economic benefits.

At the same time, there are some unknowns on the horizon, including whether a study being conducted by the parliamentary budget officer will find that the $60 billion set aside for 15 new warships for the navy isn't enough.

The Liberals also have yet to decide on a plan for replacing the string of radars in the Arctic used to detect airborne threats approaching North America. Military commanders have said they are obsolete and will likely cost billions.

Much of the speculation about potential cuts has been linked the government's search for a military commander after longtime chief of the defence staff Gen. Jonathan Vance last month announced his plan to retire. The government interviewed potential replacements last week.

Some defence insiders and observers have suggested the choice will signal the Liberals' priorities for the military over the next few years. Asked about those priorities, Sajjan listed the continued implementation of the defence policy alongside fighting sexual misconduct and racism in the military.

"At the end of the day you look at the reality of what's in front of you and then you look at who is the best person to be able to lead during this time," Sajjan said when asked about the search.

This report by The Canadian Press was first published Sept. 15, 2020.