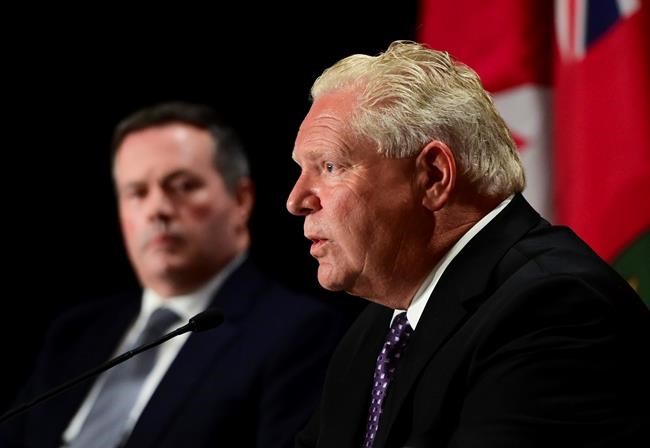 TORONTO — Ontario took a step back in its COVID-19 recovery on Saturday as Premier Doug Ford reimposed restrictions on social gatherings across the province in a bid to curb what he described as an "alarming growth" in new cases.

In rolling back limits on the number of people who can assemble both indoors and out, Ford said he was responding to a recent surge in new diagnoses that continued into the weekend. Ontario reported 407 new diagnoses of COVID-19 and one new associated death on Saturday, marking the second day in a row that the provincial tally topped 400 and representing the highest level seen since early June.

"Too much of (the increase) is being tied to people who aren't following the rules. People who think it's OK to hold parties; to carry on as if things are back to normal. They aren't."

Saturday's announcement of provincewide restrictions built on the regional measures the government introduced earlier this week in the three regions where the bulk of new cases have been identified.

Ford said indoor gatherings must now be capped at 10 people across Ontario, down from 50 under relaxed measures that took effect under Stage 3 of the province's pandemic recovery strategy. Outdoor gathering limits, previously at 100, are now set to 25.

The government also set minimum fines of $10,000 for gathering organizers and $750 for those who attend.

The tighter restrictions take effect across the province immediately and will be in place for at least the next 28 days, Ford said. They do not apply at staffed businesses, schools or places of worship.

Ford imposed lower gathering limits on Toronto, Ottawa and peel Region on Thursday and had previously stated he intended to take a regional approach to pandemic-fighting efforts.

But as case numbers surge, Ford said anxiety was mounting outside of the three primary hotspots.

"Medical officers are out there, they're concerned," Ford said. "We follow the advice we're getting off them."

Yaffe said the recent numbers are in keeping with some Health Canada projections about how an anticipated spike in COVID-19 cases could play out.

Yaffe said it's too soon to tell which of the first two models applies to Ontario, but said recent data suggests the third scenario is not in play.

"I think when people hear 'second wave,' they assume we're talking the big wave," she said. "We're hoping we're not, but we are in a wave."

Saturday's announcement came as Ontario processed a record-high number of COVID-19 tests, saying nearly 39,000 were processed in the past 24 hours.

Ford said he hopes to involve the province's pharmacies in testing of asymptomatic patients, possibly as soon as next week, but offered no other details. The plan has been met with concern from health-care unions who fear such a move would accelerate the spread of the virus.

Meanwhile, word of the tightened social gathering limits drew praise from the mayor of a community bordering one of the major provincial hotspots.

Markham, Ont., Mayor Frank Scarpitti, who oversees the city north of Toronto and not far from Peel Region, had been calling for stricter gathering limits as numbers began to climb.

"This is welcome news after we asked the province to make this necessary change," Scarpitti said in a statement. "Strict protocols have to remain in place to ensure the safety and protection of everyone. We all have a responsibility to do what is right and to avoid a false sense of security."

But New Democrat deputy leader Sarah Singh said Saturday's announcement demonstrates poor planning from the government, saying officials should have had a more robust plan to cope with future waves of the virus.

"We need to see a provincewide rollback on class sizes," she said in a statement. "How could Doug Ford believe it's not safe to have more than 10 people in a gathering, but that it's safe to have 30 kids in a classroom and 70 kids on a school bus?

Ford said Saturday the province would keep a "sharp eye" on the situation in schools, where 72 cases of COVID-19 had surfaced in 60 facilities as of Friday.

This report by The Canadian Press was first published Sept. 19, 2020.

Note to readers: This is a corrected story. A previous version said there had been no new deaths related to the coronavirus.