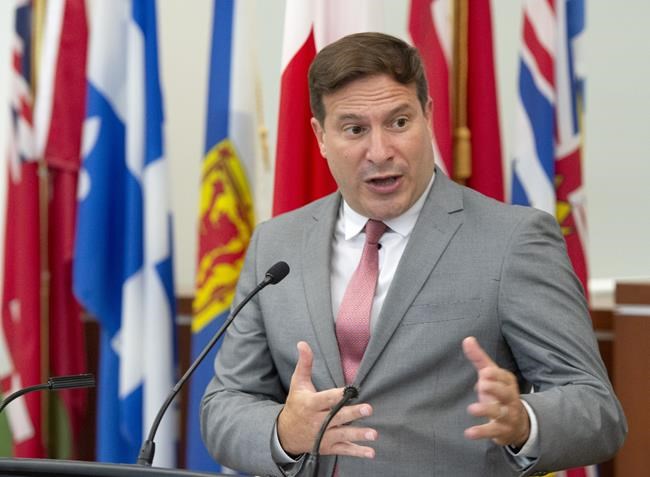 OTTAWA — Canada is seeking to admit upwards of 1.2 million new permanent residents in the next three years, a target the federal government says is crucial to the post-pandemic economic recovery.

But how realistic those numbers are in the face of closed borders, restrictions on international travel and a sharp economic downtown, remain to be seen.

"Immigrants are putting food on the tables of Canadians. They're taking care of our seniors, and they are driving the economy of tomorrow," he said outside a downtown Ottawa restaurant whose owner immigrated to Canada several years ago.

"At no time in recent history has that been more important than in the context of this pandemic. And so what this plan does is it lays out a future vision for growth, economic recovery through immigration."

While the local restaurant may be a success story, it sits at the corner of a downtown Ottawa intersection where it is clear the pandemic has taken a toll on the economy: coffee shops, shawarma joints, boutiques and other stores and services catering to downtown workers have all closed their doors.

A study by Statistics Canada released in August showed that in the early months of the pandemic, recent immigrants to Canada were more likely than Canadian-born workers to lose their jobs, mainly because they had held them for less time and, as a whole, are overrepresented in lower-wage employment. That includes in service-sector jobs.

Mendicino said Friday the economy can and will absorb more newcomers because they create jobs.

There needs to be a realignment of how the government selects immigrants for the post-pandemic economy, said Dennis Darby, the president of Canadian Manufacturers and Exporters, in a statement.

Removing barriers to how many temporary foreign workers can be admitted per facility, and making it easier for provinces to directly recruit, should be options, he said.

"Manufacturers are increasingly using immigration to supplement their workforce but there are not enough immigrants to meet the demand," he said.

The shuttered stores of Ottawa's downtown also reflect the fact that thousands of civil servants have largely transitioned to working from home, which has also affected the immigration system, with its reliance on paper application and in-person interviews.

That's not just a problem in Ottawa but around the world, as the immigration offices in embassies and consulates have largely closed or curtailed services as well.

It's led to a growing backlog in applications and doubts about whether even with the targets, the system has the capacity to sign off on new arrivals.

Mendicino said immigration has managed to continue through the pandemic, but more resources will be added to try to ease the crunch, and digital options continue to be applied.

The pandemic has driven down immigration to Canada by as much as 60 per cent in some categories. Though many billed the release of next year's target numbers as an increase, it is not clear that will happen in reality.

That lower-end target is actually below the low end of the number of immigrants, pre-pandemic, the Liberals had planned to admit in 2021, pointed out NDP immigration critic Jenny Kwan.

"The Liberals demonstrate a lack of conviction in their targets and left the door wide open for immigration levels to decrease," she said in a statement.

It's also not clear how unused room is being carried over.

For example: the Liberals had planned to admit 49,000 refugees this year. Next year, according to Friday's plan, they are aiming for 59,500.

While that looks like an increase of 10,000, the number of refugees who have actually arrived in the first eight months of this year was down nearly 60 per cent from 2019 arrivals.

So it's possible that the 2021 figures merely incorporate the shortfall from this year, as opposed to being an overall increase. Mendicino wasn't clear when asked about that issue Friday.

Either way, that Canada even continues to open its arms is welcome, said Rema Jamous Imseis, the UN refugee agency's Canadian representative.

"In an era of travel restrictions and closed borders, refugees continue to be welcomed by Canadians," she said in a statement.

"The significance of this lifeline and the deep generosity of Canadians cannot be overstated."

This report by The Canadian Press was first published Oct. 30, 2020