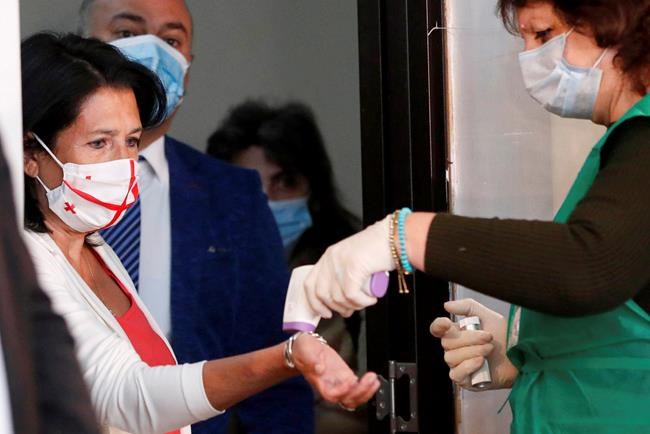 TBILISI, Georgia — Georgia's ruling party won the ex-Soviet nation's highly contested parliamentary election, according to preliminary results announced Sunday that the opposition refused to recognize as valid and used to call for protests, saying they were manipulated.

With more than 99% of ballots counted, the Georgian Dream party had received 48.1% of the vote in Saturday's election, according to the of Georgia’s Central Election Commission. The biggest opposition alliance, led by the United National Movement party, got 27.1%. Several more opposition parties cleared the 1% threshold to get seats in Parliament.

Irakli Kobahidze, Georgian Dream's executive secretary, said the party won enough seats in the 150-seat parliament to form a government. But the opposition claimed the election was rigged and refused to recognize the results.

As thousands of opposition supporters rallied in front of the parliament building in the Georgian capital, Tbilisi, on Sunday, opposition politicians called for a rerun of the election. Some refused to participate in the work of the new legislature.

“We demand new elections," United National Movement leader Nika Melia said. “We do not recognize the results of the elections and we are starting an uncompromised fight until this situation changes and the will of people prevails."

Members of opposition parties and their supporters blocked a central street in the capital and vowed to hold mass rallies until their demands are met and the election results are invalidated.

The protest united members from a wide range of opposition parties, including some who won seats in Parliament.

“The demand is that these elections cannot represent the government of Georgia for the next four years. The normal path forward is to have new elections. That’s where the consensus is right now,” European Georgia party leader Giga Bokeria, whose party won 3.8% of the vote, told The Associated Press.

The Georgian Dream party, created by a tycoon who made his fortune in Russia, Bidzina Ivanishvili, has held a strong majority in Parliament for eight years, but its popularity has dwindled steadily amid the country’s economic problems.

The Georgian economy has been badly bruised by the coronavirus pandemic and is expected to shrink by 5% this year.

Georgian Dream faced a challenge from an opposition coalition led by former Georgian President Mikhail Saakashvili’s United National Movement. The coalition fielded Saakashvili as its candidate for prime minister, but he said after the vote that he would not try to get the job.

Georgian Dream nominated the current prime minister, Giorgi Gakharia to stay on in his post.

The Organization for Security and Cooperation in Europe deemed the vote “competitive” and said in a statement Sunday that “overall, fundamental freedoms were respected" during the election. However, the organization said “pervasive allegations of pressure on voters and blurring of the line between the ruling party and the state” reduced the public's confidence in the voting process.

Saakashvili, who served as Georgia's president during 2004-2013 and moved abroad when his term ended, long has vowed to drive Georgian Dream from power. He currently holds an official job in Ukraine.

Both Georgian Dream and United National Movement are pro-Western, with goals of establishing better relations and possible eventual membership in NATO and the European Union.

During Saakashvili’s rule, Russia and Georgia fought a short war in 2008 that ended with Georgia losing control of two Russia-friendly separatist regions. The issue of the regions’ status has remained a key irritant, but ties between Moscow and Tbilisi have improved since Saakashvili’s departure.

The opposition has accused Georgian Dream of pursuing pro-Russian policies while claiming to be Western-oriented, charging that Ivanishvili, who holds no government job, has continued calling the shots in the Black Sea nation of 3.7 million.

Election protesters marched to Ivanishvili's home, which overlooks Tbilisi from a hilltop and is about 5 (just over 3 miles) away from the parliament building. Police cordoned off access to the residence.

Associated Press Daria Litvinova in Moscow contributed to this report.