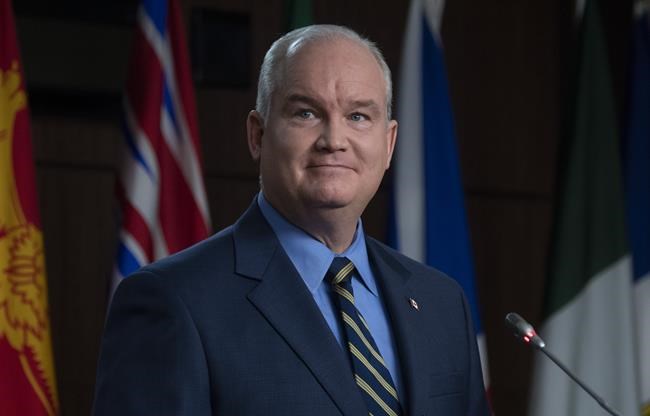 The Protecting Canada Project is airing its first 30-second ad, in English and French, on television and online.

The ad predicts that an O'Toole government would cut funding for health care, even as the country struggles through the COVID-19 pandemic, resting that assertion on decisions under the previous Conservative government and O'Toole's support for similar cuts made by current conservative premiers.

The tag line concludes that O'Toole and the Conservatives "are hazardous to your health — at the worst possible time."

Group spokesman Ian Wayne, who formerly worked for NDP leaders Jack Layton and Tom Mulcair, says Protecting Canada was formed by Canadians "with diverse political experience" and a common goal of ensuring the Conservatives don't win the next election.

He says it is backed by "progressive" individuals and organizations who believe it's "crucial" to counter the Conservative-friendly messaging peddled by what he calls "well-funded, extreme right-wing" advocacy groups like Canada Proud.

"This launch is just the beginning," Wayne said. "We will continue to grow our campaign and get our messages to more and more everyday Canadians."

Until an election is actually called, Protecting Canada, like other groups, can spend as much as it likes and never disclose where it is getting its money.

Changes to the Canada Elections Act in 2018 impose spending limits on advocacy groups and require them to disclose donors during the three-month, pre-writ period before an election is called, as well as during the campaign.

However, the pre-writ provisions don't apply in the case of a minority government since it could be defeated at any time.

The project's first ad alleges that O'Toole voted in favour of a $36-billion "cut" to health care transfers to the provinces.

That's a reference to a decision by Stephen Harper's Conservative government to scale back the annual six per cent increase in the health transfer to a minimum of three per cent — a move that guaranteed provinces would still get more money each year but $36 billion less over 10 years than they had anticipated.

The ad also ties O'Toole to Alberta Premier Jason Kenney, a former Harper cabinet colleague who endorsed O'Toole for the Conservative leadership last year and whose popularity has nosedived over his handling of the pandemic.

The ad says O'Toole endorses Kenney's response to the COVID-19 pandemic, which includes cutting 11,000 health care workers' jobs. The same approach federally could result in "tens of thousands of health care layoffs across Canada," it warns.

How an O'Toole-led Conservative government would manage the health care file remains an open question.

As the provinces have clamoured for more health care money from the federal government to manage the costs of the COVID-19 pandemic, O'Toole hasn't ruled out listening and has also said the money must flow with no strings attached.

But he'll also have to find a way to wrestle with the massive deficit and debt caused by pandemic spending.

While O'Toole has said he would bring the deficit down over an extended period of time, what programs or services he'd look to slash to do that hasn't been examined in depth.

He has pledged, however, to present ideas that counter what he's previously called the Liberals' "bogeyman" argument that he'll just slash spending across the board.

The "Canada Proud" groups the new advocacy organization mentions are run by a media company that helped O'Toole win leadership of his party last year.

He's since ended his contract with them.