National Defence grappling with new delay in $60B warship project 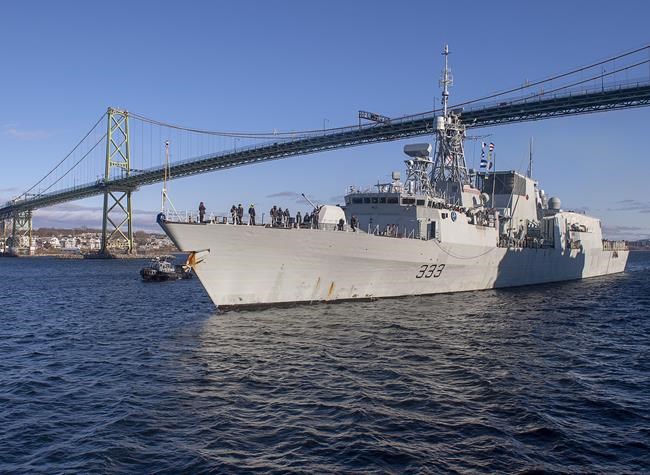 OTTAWA — The Department of National Defence says the first of 15 new warships being built for the Royal Canadian Navy will be delivered years later than expected as officials working on the $60-billion project grapple with unexpected design and construction challenges.

The delay means Canada will need to spend more on its 12 aging Halifax-class frigates to keep them floating longer, and is sure to set off a fresh wave of debate and lobbying around what amounts to the largest military procurement in Canadian history.

Yet the Defence Department’s head of procurement insists the project remains on budget thanks to built-in contingencies, while navy commander Vice-Admiral Craig Baines expressed confidence that his force would not be unduly affected by the delay.

That is despite a recent report that outlined concerns about the advanced age of the frigates, which was making it more difficult to find spare parts and conduct other maintenance on the 1980s Halifax-class warships.

“When you put ships in saltwater over time, there’s going to be an effect,” Baines told The Canadian Press in an interview. “But right now, based on all our estimates on the conditions of the ships, we’re very comfortable that we’ll be able to transition with this plan.”

The delay is nonetheless the latest setback for the new fleet of warships, which are known in military circles as Canadian "surface combatants" and are expected to serve as the Navy’s backbone for the better part of the century.

The warship project was launched in earnest nearly a decade ago when Irving Shipbuilding in Halifax was selected in October 2011 to build the fleet, with the total cost estimated at around $26 billion and the first ship to be delivered in the mid-2020s.

That vague schedule remained largely unchanged, at least on paper, even as the estimated price tag ballooned to $60 billion and Ottawa ordered several smaller ships so Irving would have work until the surface combatants were ready for construction.

But Troy Crosby, the Defence Department’s assistant deputy minister of materiel, revealed Monday that the first ship is now scheduled for delivery in the early 2030s as officials grapple with the final design and face longer-than-expected construction times.

The new warships are based on the Type-26 frigate, which is also being built by the United Kingdom and Australia, but Canadian officials have been making numerous changes to the design to meet Canada’s unique military — and industrial — requirements.

At the same time, Crosby said the British and Australian experiences have shown that construction of the new vessels will take 7 1/2 years, rather than the original estimate of five years.

The schedule slippage comes as the parliamentary budget officer is preparing to release a highly anticipated update on the estimated cost of the warship project. Defence officials have quietly expressed concern the review will show a sizeable increase.

Crosby, however, was adamant that the project remains within the $60-billion budget established by the Liberal government in 2017.

“The project had originally included a significant amount of contingency that had been put there to address these unknowns,” he said.

“That contingency is now being applied, and that's exactly what it's there for. So with that update done, we're still confident at this point that it's going to fit within the budget.”

He also said Ottawa will not pony up more money for Irving to retain its workforce as the current plan is to start cutting steel on the first new warship as scheduled in 2023-24, while work on the final design continues.

A similar approach is being taken with the Navy’s two new supply ships, which are being built in Vancouver.

Irving is currently working on a fleet of much smaller Arctic patrol ships for the navy. It originally planned to build five, before the government ordered a sixth in November 2018 to keep Irving’s workers busy until the new warships were ready for construction.

The government then committed $1.5 billion for two more Arctic patrol ships in May 2019, this time for the Canadian Coast Guard, for the same reason.

The delay does mean the navy will need to continue operating its Halifax-class frigates longer, which means investing more money into the ships and managing how and when they are used.

Defence analyst David Perry of the Canadian Global Affairs Institute expressed concern about the new delay and what it means for the frigates, some of which are dealing with corrosion and metal fatigue that could limit how long they can remain in service.

An internal Defence Department report published last year echoed some of those concerns, saying the navy’s maintenance facilities were having an increasingly tough time repairing the frigates thanks in part to a lack of spare parts and the age of the fleet.

And while Crosby said the government is working with British and Australian officials as well as industries to find ways to save time, Perry said the warship project has a long history of delays and cost overruns.

“At this point in time, this project hasn't met a single one of its major milestones,” Perry said. “So 2030-31 is now the no-earlier-than-that-date for me.”

Ottawa has rebuffed repeated calls to scrap its plan to build the ships in Canada, which advocates say could save the country tens of billions of dollars.

This report by The Canadian Press was first published Feb. 2, 2021.