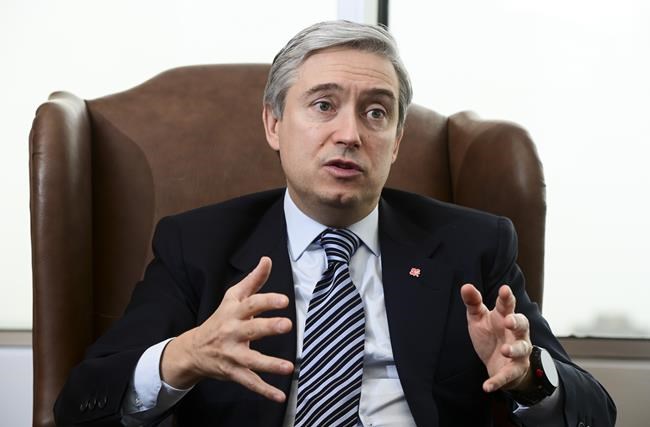 The new declaration was born out of a year of behind-the-scenes diplomacy, spearheaded by former foreign affairs minister François-Philippe Champagne, and was the result of a campaign to free Michael Kovrig and Michael Spavor, who spent their 798th day in Chinese prisons on Monday.

While ending Kovrig's and Spavor's Chinese imprisonment remains Canada's top priority, the new declaration was meant to be a broad denunciation to also end the coercive practice in other countries, such as Russia, Iran and North Korea.

In an interview, Foreign Affairs Minister Marc Garneau wouldn't name specific countries, saying the new Declaration Against Arbitrary Detention in State-to-State Relations is "country-agnostic." He said he wants to recruit more countries as signatories with the goal of ending the practice everywhere and to discourage other countries from taking it up.

But Kenneth Roth, the head of Human Rights Watch, was blunt about blaming China and the case of the "two Michaels" as a particularly egregious example.

"The Chinese government's detentions of the Canadians Michael Kovrig and Michael Spavor epitomizes this despicable practice," Roth told the 2-1/2-hour virtual launch of the initiative.

China became incensed as Canada built the coalition of countries to speak out on behalf of Kovrig and Spavor. China warned Canada of negative consequences if it continued to do that.

Asked in an interview whether the declaration was intended as a message to China, Champagne said: "My message is to all those which have been arbitrarily detained in the world: That your liberty has been stolen, but your voice won't be silenced … We stand by you, and we will fight for you at every step of the way."

China's Global Times newspaper, an organ of the Chinese Communist Party, denounced Canada for the new initiative by quoting unnamed "experts" who said it was an "ill-considered attack designed to provoke China" and would "rebound in the worst possible way."

Kovrig, a former Canadian diplomat working for the non-governmental International Crisis Group, and Spavor, an entrepreneur, were rounded up by Chinese authorities nine days after the RCMP arrested Chinese high-tech scion Meng Wanzhou at the Vancouver airport in December 2018 on a U.S. extradition warrant.

Canada and its allies have denounced the subsequent national-security charges China laid against Kovrig and Spavor and called for their release from arbitrary detention — exhortations that have fallen on angry and deaf ears in Beijing.

British lawyer Amal Clooney, the international human-rights activist who has represented imprisoned journalists and other victims of arbitrary political detention, said Monday that authoritarian regimes shroud the practice in the trappings of legal proceedings "to give a veneer of legitimacy to that act."

Clooney said she hopes more countries would sign on and that the declaration would develop more "teeth" to punish offending political leaders with travel bans and financial penalties. In the interim, Clooney said she was endorsing Canada’s initiative.

Garneau said it is fine for countries to have differences of opinion in their diplomatic relations.

"But it is totally unacceptable if citizens from our country go to another country either to visit or to work there, that they have to live in fear that they could become a bargaining chip," Garneau said in an interview.

Canada and its major allies in the G7, the Five Eyes intelligence sharing network, and countries on every continent support the new declaration, which is non-binding but aims to shame countries that engage in targeted detentions of foreign nationals to achieve a political end.

Instead, it aims to stigmatize arbitrary detention in the same vein as the Ottawa Treaty to ban anti-personnel mines.

"It is something that is intended to put pressure on countries that do practice arbitrary detention," said Garneau, saying it is "very similar to when Canada decided back in the days of Lloyd Axworthy," Canada’s then foreign minister, to spearhead the landmine treaty.

Champagne said the declaration was also modelled after NATO's Article 5, which declares that an attack on one of its members constitutes an attack on all 30 member countries.

"The concept behind that is that if you were to take one of our citizens, we will, on a voluntary basis, come together to make sure that these issues do not remain bilateral."

Champagne said the concept had its roots in discussions with British officials and won support among the countries in the Five Eyes, G7 and European Union and across the world.

"Canada's Declaration Against Arbitrary Detention is an important moment of international leadership, bringing together like-minded allies to take a stand against this unacceptable practice," British Foreign Secretary Dominic Raab said in a statement.

U.S. Secretary of State Antony Blinken said the U.S. was "wholeheartedly" endorsing the declaration and calling "on all like-minded countries to work together to pressure the nations that engage in such detentions to put an end to this practice, to release those detained under such conditions, and to respect the rule of law and human rights."

This report by The Canadian Press was first published Feb. 15, 2021.