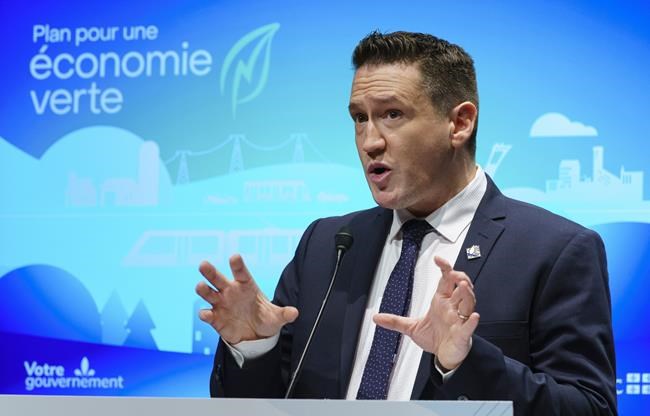 Quebec Premier Francois Legault has enlisted his environment minister to spearhead the fight against racism in the province, naming Benoit Charette to the newly created post on Wednesday.

Charette added the responsibilities as part of a small cabinet shuffle announced in the provincial capital.

One of the recommendations of a task force that Legault had convened last summer to look at racism in the province was the appointment of a minister to implement its anti-racism action plan.

The 25 recommendations outlined in the final report released in December aim to tackle racial profiling and discrimination faced by minorities and Indigenous people in the province. Charette said he's given himself until the end of the current mandate in 2022 to see those measures implemented.

"The fight against racism is first and foremost a question of human dignity," he said, calling Quebec one of the most welcoming and tolerant societies in the world.

The Legault government has maintained that systemic racism does not exist in Quebec, and Charette echoed that Wednesday, saying what is most important is acting swiftly to fight racism. Charette noted the "system" in place includes the Quebec Charter of Human Rights and Freedoms and the province's Human Rights Commission to protect against discrimination.

Legault was asked Wednesday why the post didn't go to one of the Coalition Avenir Quebec members who sat on the task force, in particular co-chairs and cabinet ministers Lionel Carmant and Nadine Girault, both of whom are of Haitian origin.

The premier said he spoke to Carmant and Girault and both have seen their workload increase in recent months. Carmant, the junior health minister, is in charge of reforming the youth protection system. Girault, the international relations minister, recently took on the immigration portfolio as well.

Charette, 44, is white. His wife is of Haitian origin and they have three children. He rejected the notion that not coming from a visible minority means lacking credibility fighting racism.

"In any case, whatever the reason, in my opinion, the colour of skin should not be an argument to disqualify someone," Charette said.

He said he is no stranger to racism, having been refused an apartment, allegedly because of prejudice aimed at his wife. He recounted filing a human rights complaint that led to the landlord being sanctioned.

Legault said he has confidence in Charette, who was responsible for dealing with cultural communities when the party was in opposition. "And Benoit, I've known for many years and I know it's a very important subject for him, so I think he's the best person to fight against racism," Legault said.

Charette said he'll be meeting with leaders from different groups and communities in the coming days.

Charette was given the environment portfolio in January 2019. Some environmental groups raised concerns his new responsibilities would mean less time for environment and climate change issues. Charette assured that wouldn't be the case, noting he has a dedicated staff.

This report by The Canadian Press was first published Feb. 24, 2021.

- By Sidhartha Banerjee in Montreal with files from Jocelyne Richer in Quebec City.