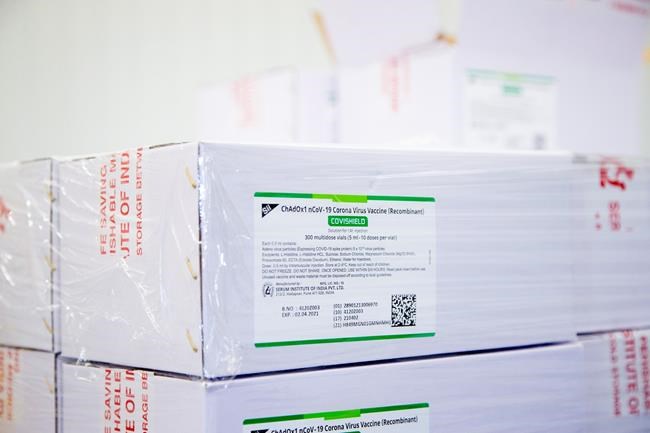 OTTAWA — A cross-partisan effort by MPs to be united in a call for the Liberal government to increase foreign aid spending on the humanitarian crisis created by the global pandemic devolved quickly into partisan bickering Thursday.

But the members of the House of Commons foreign affairs committee insisted they are on the same page in believing that without increased efforts, and a leading role by Canada, the pandemic's effect on the developing world will be profound and long-lasting.

"Dangerous variants will increase, threatening Canadians and our global economic recovery. And this will take years if not decades to correct."

The NDP wants Canada to support a motion at the World Trade Organization to suspend patent protection for a host of COVID-19 related products including vaccines, therapeutics and protective equipment. The motion would theoretically allow any manufacturing site with the capability to produce vaccines for COVID-19.

Canada has not rejected the motion, introduced by India and South Africa last fall. However it has also not supported it, countering in December with its own proposal to determine how much unused capacity there is to produce COVID-19 vaccines and getting them licensed to produce them.

A licensing agreement, for example, is how the Serum Institute of India is producing doses of the Oxford-AstraZeneca vaccine.

Canada believes the Trade-Related Intellectual Property Rights (TRIPS) agreement of the World Trade Organization may already provide the flexibility needed to get more vaccines made.

But the motion cannot pass without consensus at the WTO. It was discussed at the TRIPS meeting this week, and punted once again to the next meeting in June.

In the meantime, dozens of the world's low- and middle-income countries have yet to vaccinate a single person. The vaccine-sharing initiative known as COVAX has shipped more than 17 million doses in the last two weeks, allowing some countries to begin inoculating front-line health workers.

McPherson proposed that a subcommittee of foreign affairs take on a new study of the intellectual property barriers, but her motion won't be debated until next week.

The foreign affairs committee made 10 recommendations in their report Thursday to improve Canada's global role, including a call for more foreign aid funding, both in money for pandemic response but also to Canada's overall overseas development budget.

The state of that budget was one of many points that saw MPs drop their unified front and toss barbs at each other Thursday in a news conference discussing the report. Liberal and Conservative MPs each accused each other's governments or parties of slashing aid spending.

Conservative foreign affairs critic Michael Chong noted humanitarian groups say all the progress made in improving poverty levels around the world is at risk of being undone by the pandemic.

"In that context, the government's failure to deliver foreign aid at the levels that were in place previously, it has real consequences," he said.

That aid, MPs agreed, has to come simultaneously with increased efforts to increase vaccine availability and affordability around the world.

Canada has already contributed around $940 million toward vaccines in lower-income countries, but has also drawn criticism for accessing vaccines through COVAX when it has also signed private deals with seven vaccine manufacturers that now has guaranteed Canada will receive more than 117 million doses of vaccine by September.

The Liberals have defended that decision on the grounds the program was designed to encourage countries to contribute funds so they could not just help lower-income nations but access vaccines for their citizens too.

"Had it not been for Canada's support, Canada's contributions, we would not see the distribution of what is going to be over two billion vaccines being given to lower-income countries," said Liberal MP Ruby Sahota.

The committee report calls on Canada to donate excess vaccines to the developing world, and report back to Parliament on those efforts.

The Liberals have said previously that extra doses will be shared, but not until every Canadian who wants the vaccine has it.

— with files from Mia Rabson