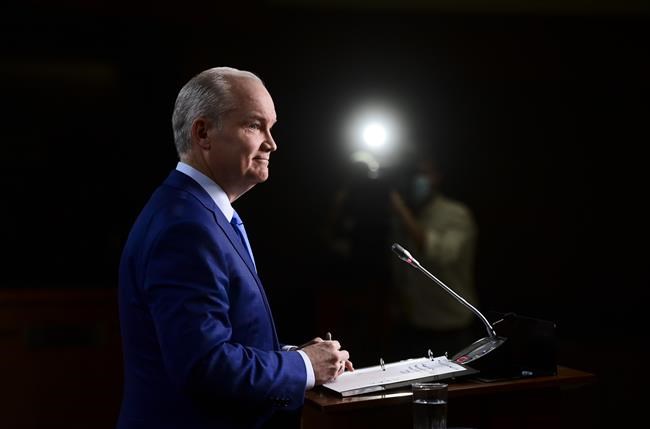 OTTAWA — In a video played at the federal Conservative policy convention Saturday, leader Erin O'Toole's son Jack did a mock news segment called "Jack has your back." But the question for the party's grassroots after nearly three days of discussion on the path forward for their movement was to what extent their leader has theirs.

O'Toole faced a grilling from delegates the day after he'd unveiled the overarching themes of what the party could offer Canadians during an election campaign, stressing that the country
has changed and the party must do so as well.

One delegate, identified as Ruth, asked O'Toole Saturday what specific aspects of the party he wants to change.

"I think it's addressing policies in a new way, but it's also making sure we communicate our conservative principles in new ways to new people," O'Toole said.

Delegates also questioned how committed O'Toole is to what's become a central focus for the Tories in recent years: scrapping the federal carbon tax.

In his Friday evening speech to party faithful, O'Toole had said he would end the tax on "working Canadians" and work with the provinces instead of imposing an overarching program.

But how the Tories meet commitments to reducing emissions without carbon pricing remains an open question.

O'Toole's comments weren't clear enough for at least one delegate who asked for a simple yes or no answer to the question of whether the carbon tax would go.

"Yes, we will scrap Mr. Trudeau's carbon tax and have a serious plan to get our economy moving and emissions down," O'Toole said.

Since winning leadership of the party last year, O'Toole has been clear the party must present a detailed agenda on combating climate change in order to win Canadians' trust.

His efforts in that regard were derailed somewhat during the convention, when 54 per cent of delegates voted against an effort to place a line in the party's existing policy document declaring "climate change is real."

When asked for his response to that vote, O'Toole called it an important question and went on to reiterate parts of his speech from the day before.

"The debate is over. Climate change is real," he said in response to a delegate from British Columbia.

A faction of Conservatives don't believe that claim, among them some linked to the anti-abortion group Campaign Life Coalition.

They had told their supporters ahead of the convention to oppose the environment motion on the grounds "climate change alarmism" was being used to justify abortion. But despite the best efforts of the CLC and other like-minded groups, the topic of abortion was one largely absent from the convention floor.

The fact they failed to get it there was characterized by them as a deliberate party move to keep the issue off the agenda.

Conservative officials said the advocates' efforts didn't pass muster with the rules the convention had set up to govern debate.

What message, then, should social conservatives take away from the convention, one delegate asked O'Toole Saturday.

"I'm very proud of all parts of our party."

Moderating the question-and-answer session was former party leadership candidate Leslyn Lewis, who is seeking election in an Ontario riding in the next federal campaign.

She had a strong showing in last year's contest in part because of her own socially conservative convictions.

"That's music to my ears," she said in response to his answer.

O'Toole's direction for his party has been under scrutiny since he took the helm as leader last August.

His campaign centred around a promise to stay close to the "True Blue" roots of the party — a jab at the "red" or more progressive side.

But since then he has markedly softened his tone, and detractors have alleged he can't be trusted.

Walied Soliman, who had been O'Toole's leadership campaign co-chair, suggested in a panel earlier Saturday that the leader wasn't changing colours.

Growing the reach of the party will take courage, he said.

"That doesn't mean that we dilute who we are, we shall never do that," he said.

"I know Erin well enough to know that's not the leader or the man that he is."

This report by The Canadian Press was first published March 20, 2021.