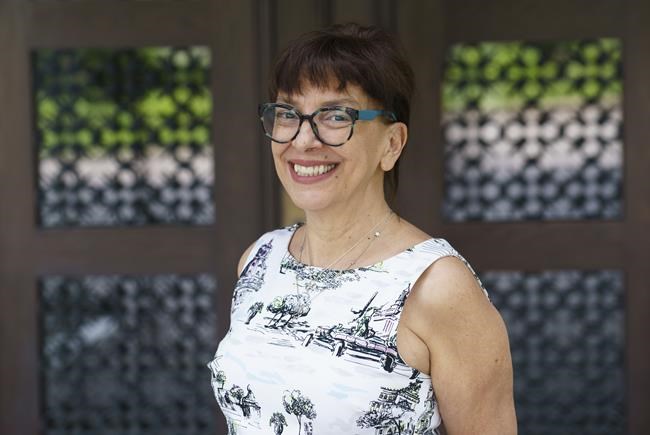 OTTAWA — After decades of digging through archival material and talking with the relatives of people of Italian origin detained in Canada during the Second World War, Montreal historian Joyce Pillarella says Canada's long-awaited apology gives her family and others the moral justice they have been waiting for.

Pillarella started learning more than 20 years ago about the struggles of the more than 600 people who were interned when she found a postcard sent from her grandfather who was confined at a camp near Fredericton, N.B.

She then started combing through Canada's national archive before she started talking to the families of those affected.

"When I was starting to do cold calls to try to find families, a lot of people didn't want to talk to me," she said in an interview with The Canadian Press.

"What I realize now is that they didn't want to talk because they felt insignificant, their story was insignificant. They were afraid of being judged wrongly. There was the shame of the story."

Prime Minister Justin Trudeau is set to deliver a formal apology in the House of Commons Thursday for the internment of Canadians of Italian background during the Second World War for several years at three camps in Petawawa, Ont., Minto, N.B., and Kananaskis, Alta. The apology is not expected to come with individual compensation.

Justice Minister David Lametti, the first Canadian justice minister of Italian heritage, said the internment happened following an order-in-council that was promulgated by the then-justice minister Ernest Lapointe, and it resulted in taking hundreds of people of Italian origin from their families and declaring about 31,000 as "enemy aliens."

"Not a single person was ever convicted, and in addition, people weren't afforded due process," he said in an interview.

"There wasn't anything other than the fact that their name may have appeared on a list somewhere."

Pillarella said the Canadian government asked the RCMP to prepare lists of Canadians of Italian heritage after Italy invaded Ethiopia in the mid-1930s.

She said Italian-Canadians had to do a lot of their business through the Italian consulates at the time.

"People had to be sympathetic with the consulate or at least appear to be, because otherwise they're not going to get anything done," she said.

Lametti said people were put on RCMP lists for having made donations to the Italian Red Cross or for being members of certain labour groups.

"It is true that the Fascist Party did have organizations in Canada but, in the 1930s, they were popular," he said. "It didn't mean that people were disloyal to Canada. In fact, Italian-Canadians generally were very much disappointed when Italy joined Germany in that war effort."

Joan Vistarchi, whose father Salvatore Vistarchi was interned between June 1940 and March 1943, said the RCMP arrested her father in his Montreal apartment without giving him any reason.

"He was put on a train, and he didn't know where he was going. Nobody would say where they were going, but he ended up in the Fredericton internment camp in New Brunswick," she said.

Vistarchi noticed as a child her father would remain very silent on June 10 every year. She asked her mother what was wrong with her dad but her mother would wave it off by saying, "I just don't think he's feeling well today."

When Vistarchi became a teenager, she learned that her father's sadness on June 10 was because he was detained on that day.

"It was kept pretty silent for a long, long time, and then, only little pieces came out," she said. "To his dying day, (my father) wondered why was he imprisoned or put in an internment camp."

Pillarella contacted some 150 families across Canada to collect the stories of the people who were interned during the war.

She said the suffering of the women and the children left behind could be even greater than that of the men who were detained in internment camps.

"For the women in the 1940s, there were big families usually, I mean it was common (to have) six, seven, eight children. The breadwinner was gone," she said. "Taking care of a household in the 1940s was a big, big job. … It's not like today where we have appliances."

She said families of Italian origin were stigmatized as "state enemies" and had to battle to survive as kids had to get pulled out of school, and women ended up finding domestic work on top of taking care of their big families.

"People didn't want to hire Italians. They didn't want to rent to Italians," she said. "There were people that were afraid to help (Italian-Canadians) because they thought 'Oh my god, the RCMP is watching. My husband's gonna get interned also."

Cinna Faveri said her father, Rev. Libero Sauro, was interned in September 1940 and was released in December of the same year. Four of his seven sons were serving in the Canadian military at the time.

Two of her brothers were airmen serving in England, and another one was a signalman fighting in Italy and Holland, she said.

She said her family, unlike most in the Italian community in Canada, was comfortable talking about what happened.

"Whenever I mentioned it to anybody, my close friends, my new friends, anybody, they're shocked," she said.

"They don't know it. Nobody knows about it."

Lametti said it's critical to share the stories of these families through commemoration and education.

"We're sorry," he said, adding his message to families was "as your parents made sure that this stood as something that would make you better Canadians, we're hoping to tell your story, so that all Canadians can be better."

Faveri said the apology is necessary even if it's too late.

"It's far too late in coming. But, because for historical reasons, it has to come, even if it's late."

Vistarchi said the apology is important because the names of people who were interned are going to be cleared, and the descendants will be given some kind of closure.

"However, I really feel in my heart of hearts, as much as I really am grateful for this apology, that it would have been nice if one, at least one, of these internees had been alive to hear this. They're all dead," she said.

"Those are the ears that should have heard this apology."

This report by The Canadian Press was first published May 24, 2021.