Uncertain path ahead to next year’s Ontario election, experts say 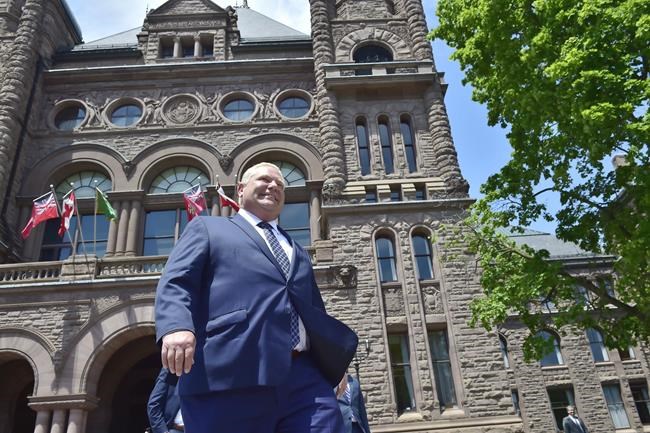 TORONTO — With exactly one year until Ontario heads to the polls, experts and political observers say the cloud of uncertainty surrounding pandemic life will have a profound impact on the province's next election.

On June 2, 2022, Premier Doug Ford and his Progressive Conservatives will be vying for re-election, a prospect that has been cast into serious doubt by their handling of the third wave of the COVID-19 pandemic and the chaotic vaccine rollout.

Ford's approval ratings have seen a sharp drop in recent months and his chances to hold on as premier will hinge on his ability to bring the province out of the pandemic and change the channel to issues more suited to his party's strengths, the experts say.

"This election is going to be crazy hard to predict," Western University political science professor Cristine de Clercy said, adding that voters' natural inclination to re-elect a first-term government may not apply in this case.

"The stress and challenge of COVID has aged this government more prematurely than normal, so it could be that people are unusually ready to debate the merits of the incumbent."

Initial praise for Ford's tough measures and simple messaging during the first wave of the pandemic all but disappeared when the second wave hit the province, and by the third wave it had turned into public outrage.

His rush to reopen the province too soon in February - against the advice of the science advisory table - contributed to a devastating third wave that overwhelmed hospitals and pushed the health-care system to the brink of collapse.

The prolonged lockdowns have devastated non-essential businesses, with many restaurants and retail stores, especially in Toronto, closing their doors for good.

The vaccine rollout plan, which has lacked cohesion and clear messaging from the get-go, has added to the people's frustration with the Ford government.

More recently, a series of decisions that experts called "misguided" - such as closing playgrounds and expanding police powers, both of which Ford was forced to reverse after public outcry - led to a nine point drop in the his approval ratings, according to an April 21 poll.

Abacus Data CEO David Coletto said the poll found 46 per cent of respondents had a negative view of the premier, up from 37 per cent in March.

The poll also found that 22 per cent of those surveyed who voted for Ford's Progressive Conservatives in 2018 now think negatively of the premier, which means some of the swing votes that helped him take power could be up for grabs.

Overall, the Abacus survey of 1,007 Ontarians said if a vote was held that day, the Liberals would receive 35 per cent of the vote, the PCs would place second with 34 per cent, the NDP third with 23 per cent, and the Green party last with five per cent of support.

Despite that, Coletto said Ford's Progressive Conservatives' slide in the polls appears to have stabilized in recent weeks.

"They're holding their own in the Greater Toronto Area, which is where this election is going to be won or lost. .... I would still venture to say Ford's the favourite a year out."

Peter Graefe, a political science professor at McMaster University, said he doesn't think the damage done to Ford's approvals during the third wave is "baked in" yet.

But that could change if Ford returns to his impulsive pre-pandemic ways of settling scores and mishandling files like the botched licence plate redesign or his attempt to hire a family friend as Ontario Provincial Police Commissioner, he said.

"Prior to the pandemic, this government proved they were immensely self-destructive and were prone to so many own-goals," Graefe said. "If they return to those habits it will be a problem."

Tamara Small, an associate professor of political science at the University of Guelph, said it will be difficult to predict which issues will dominate the election. If Ontario manages to put the pandemic behind it, she said the economic aftermath will take centre stage for many.

"The question is always, were you worse off last year than you are this year? Lots of people are going to be worse off," she said. "I think pocketbook issues will certainly be important for lots of people coming out of the pandemic."

Small is not as optimistic about whether the outrage over the pandemic in long-term care homes will dominate the election debate, in spite of the repeated calls for Ford's government to take action on the file.

"I would like to believe that Ontarians would like this to be the long-term care election," she said, calling it one of the worse "public policy failures" of the last decade.

Geneviève Tellier, a political science professor at the University of Ottawa, said the election could prove to be an opportunity for the provincial Liberals to retake power, as their brand appears to have bounced back from a historic defeat in 2018.

Tellier said while the new Liberal leader is still widely unknown to most Ontarians, the Liberal brand remains strong in the province.

"The polls are very surprising for the Liberals," she said. “Yes, Steven Del Duca is not known even though he has been in politics for years, but that could help them seem like a new Liberal party.”

This report by The Canadian Press was first published June 1, 2021.