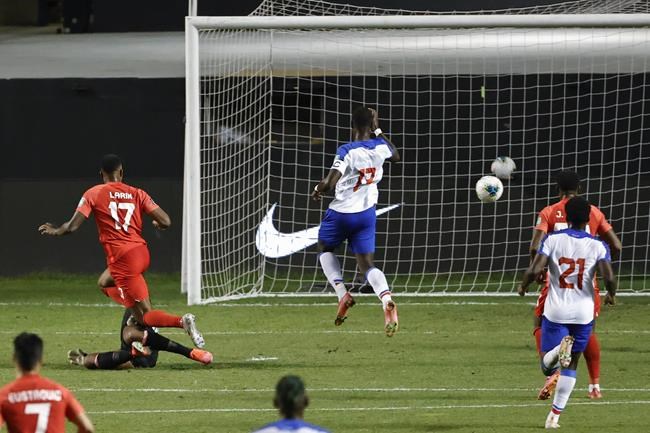 An own goal by goalkeeper Josué Duverger when he mis-hit Kevin LaFrance's back pass put No. 70 Canada ahead in the 46th minute against 83rd-ranked Haiti. Larin added his 15th international goal in the 74th and Hoilett scored his 11th in the 89th to give Canada a 4-0 aggregate win in the home-and-home, second-round matchup.

The match was moved to the former home of Major League Soccer’s Chicago Fire because of Canadian government coronavirus restrictions.

Panama played to a 0-0 draw at Curaçao in Willemstad to advance on 2-1 aggregate and No. 69 El Salvador beat 135th-ranked St. Kitts and Nevis 2-0 in San Salvador to advance on 6-0 aggregate. California-born Joshua Pérez, who played for the U.S. at the 2015 Under-17 World Cup, scored his second goal of the series in the 24th minute and Gerson Mayen added a goal in the 87th.

The United States, Mexico, Costa Rica, Honduras and Jamaica had automatic berths to the final round. The U.S. will open the 14-match final round at El Salvador on Sept. 2.

Edgar Bárcenas of Panama had a penalty kick in the 57th minute saved by Columbus goalkeeper Eloy Room, leaving Curaçao needing only a single goal to advance because of the away-goals tiebreaker.

No. 76 Curaçao was being led by interim coach Patrick Kluivert while coach Guus Hiddink recovers from COVID-19. Panama is ranked 78th.

The top three nations in the regional finals, which run through March 30, advance to the 32-nation field for the 2022 World Cup in Qatar. The fourth-place team advances to a playoff for a berth against a team from another confederation.