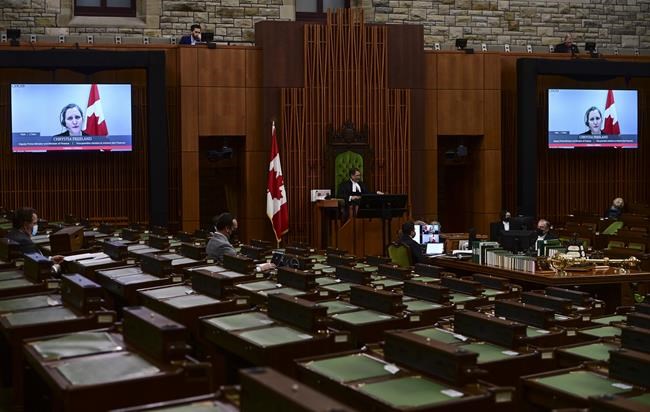 OTTAWA — Like millions of Canadians, members of Parliament are contemplating with mixed emotions the prospect of returning to business as usual after 15 months of working from home.

For most MPs, a return to normal means gruelling travel, long stretches of time away from family and copious amounts of time spent warming seats in the House of Commons when they could be doing something more productive.

Even so, they seem surprisingly eager to get back to that routine once the COVID-19 pandemic is finally licked.

Since last September, the Commons and its committees have been fully operational in a hybrid format, with only a small contingent of MPs physically present while the rest participate and vote virtually from their homes or constituency offices.

Prior to that, the Commons had spent almost six months sitting only sporadically for a day or two at a time, with a minimum number of MPs in the chamber, to avoid spreading COVID-19.

Liberal whip Mark Holland says he's been "blown away" by how well Commons staff have been able to make the hybrid format work. But he still doesn't want to continue it once the pandemic is over.

"There's no doubt for me the importance of us getting together in person and how much has been missed in the inability to do that,"  he says.

"I really think that physical presence in Ottawa is so essential to the work we do. There's a lot of cross-pollenization of ideas, a lot of opportunities to talk that are spontaneous and connections that are made that I think are really important sauce in the business of making Parliament work that we've really been missing out on."

New Democrat MP Daniel Blaikie is similarly not keen to retain virtual proceedings, despite the advantages of working from his Winnipeg home.

"It's been really nice to be close to my kids for the last 15 months," he acknowledges. "It's nice to be in your own home and close to your creature comforts and it's been so nice not to be travelling for 10 hours a week in my case and much more for many other MPs and that's time you can't get back."

Nevertheless, Blaikie says, "I can't say that I'm a big proponent of the virtual Parliament."

"It's a totally different vibe and culture that's come with this Parliament and it's been very isolating in some ways, which is really antithetical to politics," he says.

"Like, politics is the art of figuring out how we can all get along, I think at it's best anyway ... and that's harder to do when you never see each other."

For Bloc Quebecois MP and deputy House leader Christine Normandin, "the remote Parliament has kind of become my reality."

Newly elected in October 2019, she had only a handful of weeks to experience a normal Parliament before the pandemic hit and changed everything.

Normandin says she's still managed to get to know her 31 fellow Bloc MPs but acknowledges "it's not the same as having in-person caucuses or being in the House all together and having side conversations all the time, things that you cannot really have while being in Zoom."

Blaikie too has "really missed the collegiality" of the NDP's 24-member caucus, noting that the "sense of solidarity" that normally prevails helps sustain MPs in what can be "sometimes a very thankless" and unforgiving job.

For Holland, whose job is to keep in line a much larger, 155-member Liberal caucus, the absence of in-person contact has made it "very hard to get everybody on the same page."

Rookie MPs especially, feel "like they didn't get a chance to participate" or get to know their colleagues, he says. And it's been even harder to get to know new MPs from other parties and make connections that can be vital to the survival of a minority government.

"Usually, you kind of get to know them in the hallways and in committee rooms and it hasn't happened. So there's a lack of cohesion in some ways that comes from not being able to establish those relationships," Holland says.

Normandin believes the virtual proceedings have made the government less accountable.

It's harder, she says, to press for answers from ministers who aren't actually in the Commons and impossible for journalists who would normally chase after them with questions following an appearance in the chamber or at a committee.

"If they're online, they just need to disconnect and then that's it, they're not accountable anymore and nobody asks them further questions."

Blaikie thinks virtual proceedings have also made it harder for the opposition-dominated Commons to command respect from the minority Liberals.

Having to "face down the House of Commons every day really does give the House a presence and a gravitas that's just hard to capture any other way," he says.

Conservatives were the most reluctant to adopt the hybrid format and are the most keen to see the end of it.

"Anyone who watched the proceedings over the past year will tell you that video conference debates are no substitute for the real thing," Conservative whip Blake Richards said in a statement to The Canadian Press.

"From the very beginning, we've held that these measures need to be temporary for the duration of the pandemic and that MPs should be getting back to work in person when it is safe to do so."

Still, there may be some aspects of the pandemic format that might be worth retaining at least in part. If so, Holland, Blaikie and Normandin all stress it should only happen with all-party consensus.

"There's definitely good things that came out of it," says Normandin.

For instance, she says some measure of remote participation may encourage people with young children or hoping to start a family to get into politics. She also wonders whether it might make sense to continue virtual participation in certain circumstances, such as a bad snow storm.

"Nobody will tell you, 'I want the House to become 100 per cent virtual,'" she says. "Nobody wants that. There will have to be a balance."

Holland vividly remembers late Liberal colleagues Mauril Belanger and Arnold Chan showing up for votes in the Commons despite struggling with painful, debilitating illnesses. Perhaps, he suggests, there could be an allowance in future for remote voting for MPs in ill health.

Although not enamoured with virtual proceedings himself, Blaikie is hopeful that the procedure and House affairs committee, on which he sits, will conduct a thorough review of what worked and what didn't during the pandemic and look ahead with a "willingness to try new things."

"I think one of the things we've learned in this pandemic is you can change the way Parliament does its business and the sky doesn't fall," Blaikie says.

"It would be strange to go through an experience like this and decide nothing should change at all. But picking the right changes is an art, not a science, and there's no right answer."

This report by The Canadian Press was first published June 27, 2021.