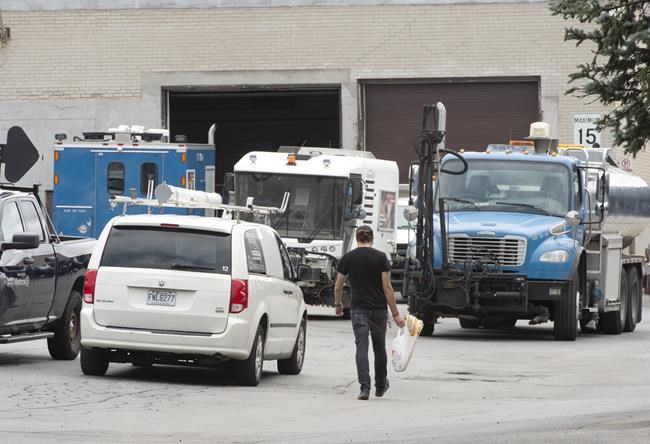 MONTREAL — Blue-collar workers employed by a Montreal borough say they're seeking compensation from the city after a pair of reports earlier this spring revealed allegations of widespread discrimination against Black and other racialized employees.

Celeste, a longtime worker in the Montreal North borough who did not want to give his last name for fear of reprisals, says Black and other racialized employees of the district are passed over for opportunities because managers prefer hiring white people. He says he's been left out of training sessions, asked to do menial work below his seniority level and subjected to racist comments on the job.

The constant rejection and humiliation over the years have affected his sleep, his marriage and especially his morale. "It was like something has been taken away from me that I had in me," Celeste said in a recent interview. "This spirit I had to succeed, to go further."

About 40 of Montreal North's racialized employees have asked their union to file grievances for moral and other damages in connection with lost wages and benefits and for the attacks on their dignity, Fo Niemi of the Center for Research-Action on Race Relations said in a recent interview. Niemi's group is supporting the workers in their quest for compensation from the city.

The union grievances follow the release of two reports commissioned earlier this year revealing Black and other racialized employees of the Montreal North borough said they faced unfair and discriminatory hiring practices that prevented them from accessing better jobs and pay.

Celeste and another longtime Montreal North borough employee told The Canadian Press they and their Black colleagues have been subjected to racist comments at work and denied the same opportunities that white colleagues are given.

The City of Montreal has acknowledged the existence of systemic racismwithin its civil service and says it's working with the borough to improve diversity and inclusion. In a recent statement, the city said it would support the borough in implementing all the recommendations of the two reports, adding that a diversity and inclusion advisor had been hired to oversee the process.

But Niemi and the workers say Montreal needs to do more than change its culture: it needs to compensate the workers who suffered discrimination. "If you really are committed to systemic racism, it’s not about changing systems and policies but also supporting victims," Niemi said.

Luc Bisson, president of the Montreal blue-collar workers' union, confirmed there have been grievances filed as a result of the reports, but he could not confirm their nature.

Celeste said that on two occasions, he was discriminated against when applying for permanent jobs for which he was qualified at the Montreal North borough. The first time, he said, the posting was taken down and later reposted. In the second instance, the job was reposted to include qualifications he didn't have. It went to a white employee who was less senior, he said.

The second report, produced by an expert hired by the union, documented the same problems as the first. Written by Université du Québec à Montréal professor Angelo Soares, the report concluded the workers' allegations of discrimination were "founded" and urged the City of Montreal, the borough and the union to take "urgent" action to correct them.

Sabia's report delved into the process of driving a heavy truck for the city — which is seen among workers as one of the better jobs at the borough and key to advancing within the administration. The borough, Sabia said, required employees who want to drive trucks to pass a test involving backing up a truck with a trailer — even if that skill is not part of the job description — a requirement that is seen by racialized employees as a barrier.

A Haitian employee of the Montreal North borough told The Canadian Press that many immigrants failed the course because they weren't from a cultural background where driving a trailer is common. "We had to tell the trainer that immigrants don't fish, don't hunt," the employee, who didn't want to be identified because they feared reprisals, said in a recent interview. "When we have time off we do other things. It's like expecting everyone to like hockey."

The employee said the borough doesn't offer to train employees how to drive a trailer. As a result, the employee said, some Haitian workers have had to scramble to find someone outside work to teach them or suffer the humiliation of failing the course and being permanently relegated to menial or physical jobs such as emptying trash cans.

A third borough employee, who is white, told The Canadian Press he was suspended by his employer after speaking out about the unequal treatment his colleagues experienced. He confirmed a group of employees are hoping for financial compensation.

Sabia issued a number of recommendations, including that the city conduct a wide examination of the internal relations in the borough. He also recommended the city clarify the hiring process and ensure all employees have equal chances to succeed at the courses offered to attain certain positions.

While Sabia's report noted that the city had made improvements to its processes, none of the three Montreal North blue-collar workers interviewed by The Canadian Press said they had noticed any positive changes.

Celeste said that if he is successful in receiving compensation, he will consider quitting his job and leaving Montreal to find better working conditions.

This report by The Canadian Press was first published July 12, 2021.