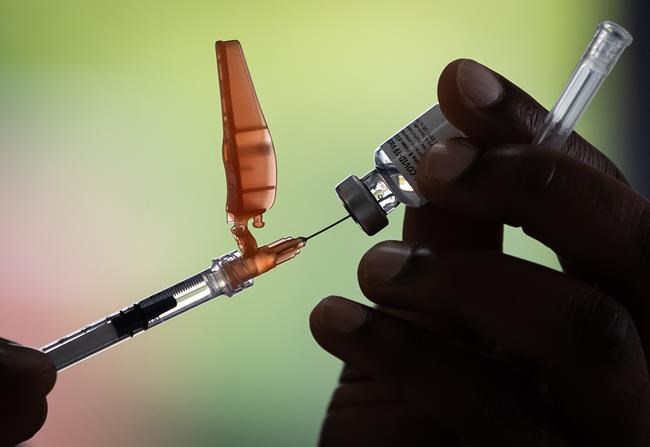 "There's a 20-point gap with respect to the rate of vaccination in Black Canadians compared to the Canadian average," Sekyi-Otu said in an interview. "When you look at vaccine confidence, unvaccinated Black Canadians are least likely to say that they'll definitely get the vaccine."

Sekyi-Otu said the Black Opportunity Fund partnered with the African Canadian Civic Engagement Council and the Innovative Research Group to try to understand why Black Canadians appeared to be getting vaccinated in lower numbers.

The survey found that as of early June, when more than 60 per cent of Canadians had received at least one dose of the COVID-19 vaccine, 45 per cent of Black Canadians surveyed said they were at least partially vaccinated, compared with 65 per cent of white Canadians and 43 per cent of non-Black visible minorities.

Sixty per cent of Black Canadians surveyed who didn't have at least one dose expressed some level of hesitancy to get vaccinated, compared with 55 per cent of white Canadians and 44 per cent of non-Black visible minorities.

The figures are in line with vaccination data in Toronto, where the neighbourhoods with the lowest vaccination rates also have some of the largest Black populations.

Dunia Nur, president of the African Canadian Civic Engagement Counsel based in Edmonton, said addressing hesitancy in Black communities will require "a variety of policy shifts" from government that take into consideration language needs, as well as differences in education and socio-economic disparities.

“These include investing in strategies that work with Black-led and Black-focused community organizations to address COVID-19 vaccine knowledge gaps and related trust barriers," Nur said in a statement.

Black Canadians responding to the survey were less likely to be hesitant about vaccines if they trusted their health-care providers and the vaccine makers, could take paid time off work to get vaccinated, and were confident in where and how to go about getting a shot.

"When we talk about hesitancy, we speak about the ABCs," said Sekyi-Otu. "I'm talking about access, belief and confidence."

He said access is affected when Black Canadians are more likely to work in jobs where taking paid time away to be vaccinated is difficult or impossible. Belief in the vaccines can be eroded if you don't trust the people providing the information about them, and confidence that the vaccines work is harmed when people who are already less trusting of the health-care system get mixed messages about vaccine safety and effectiveness.

Sekyi-Oto says governments need to ensure that people can take time off work to be vaccinated and take immediate steps to provide culturally sensitive and appropriate delivery and education about vaccines in Black communities.

"You have to build a system where the people who are leading the system look like the people using the system," he said. "And so we want to create a culturally sensitive system, engage with the community so that they can come up and take the vaccine."

The survey is being released as the Public Health Agency of Canada reports new data showing COVID-19 death rates in the first eight months of the pandemic were highest in communities with lower incomes and higher visible minority populations.

The data is the latest report from the agency that outlines the inequities surrounding COVID-19 in Canada.

This report by The Canadian Press was first published July 14, 2021.