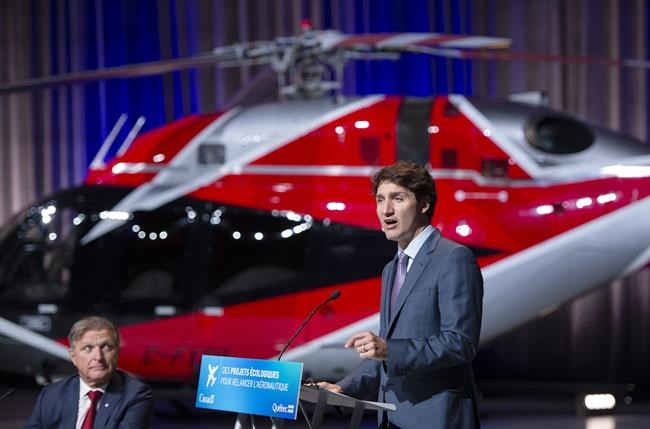 MONTREAL — The federal government is investing up to $440 million in Quebec's aerospace industry to subsidize major companies operating in a key sector of the province's economy, Prime Minister Justin Trudeau said Thursday.

Trudeau made the announcement in Montreal, a day after he travelled to Quebec's Gaspé region to pledge up to $25 million to expand a wind turbine plant. The millions of dollars in federal money for Quebec come ahead of a likely election campaign, the date for which has not been set.

Speaking to reporters, Trudeau denied he was already campaigning. "In an election campaign, you make promises about what you might do once you're elected. Right now, we're continuing the work that we got elected for in 2015 and in 2019," he said.

Coupled with $245 million from the Quebec government, Trudeau said the new aid package for the aerospace sector will total as much as $693 million. The prime minister said the funding will subsidize projects being developed by three large aerospace companies operating in the province: Bell Textron Canada, CAE and Pratt & Whitney Canada.

"Today, we’re investing to create good, well-paying jobs for our recovery," he told a news conference alongside Quebec Premier François Legault and aerospace executives. "This investment will also secure the industry’s long-term future in Canada by developing green-aviation projects and more clean technologies."

Trudeau said the money will create or support 12,000 jobs and make internships available to more than 6,200 students.

Legault told reporters the spending announced Thursday will create about 1,000 new, high-paying jobs in the province. He said the money pledged by his government and by Ottawa will be added to about $900 million of private investment in Quebec's aerospace sector, one of the largest in the world.

Trudeau also announced an investment of $92.5 million over three years in Quebec under the Aerospace Regional Recovery Initiative, which is a fund dedicated to help small and medium-sized aerospace firms recover from the COVID-19 pandemic.

"Whether it’s projects to lower your carbon footprint, or support for AI solutions to better manage your inventory, we’re here to help your business innovate," he said about the kinds of projects that can receive funding. The federal money comes from funds earmarked to support the aerospace industry in the April federal budget. Much of the money is intended to help aerospace companies develop "greener" technologies, Trudeau said.

The subsidy for Pratt & Whitney Canada, based in Longueuil, Que., will help the company continue developing a hybrid electric turboprop engine that company president Maria Della Posta said is intended to reduce carbon dioxide emissions by 30 per cent compared to traditional turboprop engines.

Helicopter manufacturer Bell Textron Canada said it will use the money to continue developing lower-emission helicopters. The company has already built a helicopter with an electric system that has replaced the traditional rear rotor. "This tail system has demonstrated the benefit of electric propulsion, including noise reduction," president Steeve Lavoie told reporters.

Suzanne M. Benoît, president of aerospace industry group Aéro Montreal, said, "Quebec is positioning itself in sustainable mobility; it can be cars, it can be buses, it can be rail, and now it's aerospace."

The government funding is good news for the industry, she said, adding that this kind of support is necessary for Quebec's aerospace sector to compete against companies in France and the United States that also receive aid from their governments. "This is what you have to do if you want to maintain an aerospace industry," she said in an interview.

This report by The Canadian Press was first published July 15, 2021.