Canadian Armed Forces personnel, assets on the ground in Afghanistan 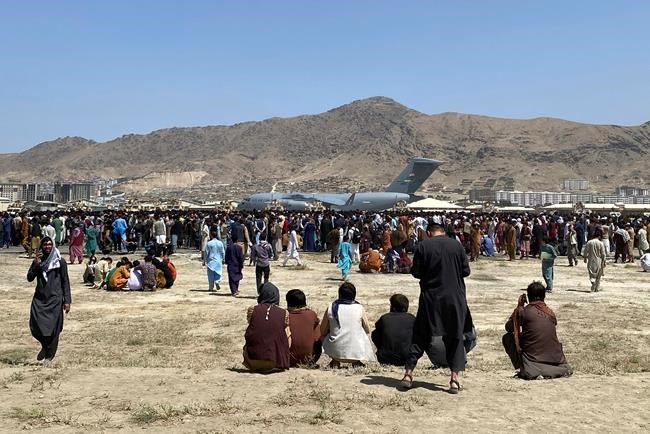 OTTAWA — Canadian Armed Forces assets and personnel have arrived on the ground in Afghanistan to co-ordinate at the tactical level with the United States and other allied partners, Prime Minister Justin Trudeau said Thursday while campaigning as Liberal party leader.

Trudeau said this will help get Canadians, Afghans and their families to safety and that two CAF C-17s will make regular flights into Kabul to support evacuation efforts.

"Canada has personnel on the ground now and we'll have more personnel arriving later today to help with the processing," Trudeau said at a campaign stop in Victoria.

Trudeau doubled down on his previous criticism of the Taliban for limiting the movements of fleeing Afghans on the ground, and signalled that could have dire consequences.

"We are going to be there with aircraft, with spaces on aircraft, to bring people to safety. But unless the Taliban shift their posture significantly, which is something the international community and Canada are working on, it is going to be very difficult to get many people out," he said.

"We will get some certainly," he said, but added that getting "as many as we'd want" out of Afghanistan "is going to be almost impossible in the coming weeks."

"I can assure you that I and our ministers and our government is working extremely hard to ease all the barriers," Trudeau said.

Trudeau said he and his ministers understand the fears, anxieties and concerns of Afghan Canadians.

Trudeau says the images out of Kabul have been heartbreaking and he told the community his government would do whatever it takes to support the people of Afghanistan and it would continue its efforts on evacuations.

He adds that he knows Canadians from coast to coast will step up to support Afghans and welcome people who will build better lives not just for themselves, but for everyone in Canada.

This report by The Canadian Press was first published Aug. 19, 2021.