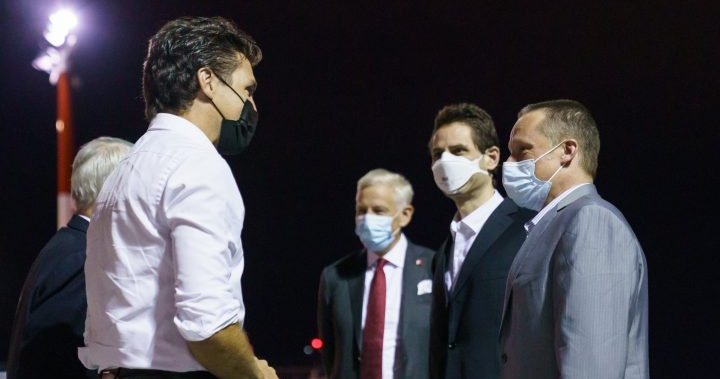 The call was the second between the two leaders and was billed at the time by both sides as an attempt to unlock the political stalemate between the two countries amid rising tensions.

The White House offered new details about Biden's involvement as it played down any link between the release of Spavor and Kovrig and last week's decision by the U.S. Department of Justice to abandon its extradition of Meng Wanzhou in a British Columbia court.

Meng was arrested on Dec. 1, 2018, at Vancouver’s airport by the RCMP because the U.S. wanted her extradited to face fraud charges, and the two Michaels were arrested nine days later in China in what is widely seen as retribution.

Press secretary Jen Psaki said the U.S. Department of Justice is an independent agency and reached the decision to pursue a deferred prosecution agreement with the Huawei executive on its own.

But she said Biden pushed for the release of the two Canadian men when he spoke to Xi by telephone Sept. 9.

"He raised the two individuals, the two Michaels — who have been released, very positive news. It should not come as a surprise that President Xi raised the Huawei official, but again, there was no negotiation on this call," said Psaki.

"These two leaders raised the cases of these individuals, but there was no negotiation about it. It was President Biden raising and pressing again for the release of these two Michaels, as is something that happens in every engagement we do with the Chinese — or had, up to this point in time."

The Chinese foreign ministry confirmed Monday that Xi also played a direct role in the affair, which came to a stunning conclusion on Friday when Meng was allowed to return to China and the two Michaels were returned to Canada on simultaneous flights that departed at near identical moments.

Foreign Affairs Minister Marc Garneau used his Monday address to the United Nations General Assembly to affirm the solidarity of Canada and its allies in defending human rights and international law in the wake of Kovrig and Spavor's release.

"Canada observed the rule of law, and two Canadian citizens paid a heavy price for this commitment. We did so as a matter of principle, and we are proud of the courage of our two citizens, the good faith and resilience of their families, and the determination and creativity of our diplomats," Garneau said.

"I want to recognize the support of our many international partners in standing with these Canadian citizens, as well as those who helped in developing and signing the Declaration on Arbitrary Detention in state-to-state relations."

Irwin Cotler, a former Canadian justice minister, said he does not believe the resolution of the case will embolden China's much-maligned practice of what has come to be known as "hostage diplomacy."

Cotler said the international support that Canada was able to build through its 60-plus country declaration against arbitrary detention has put China on notice that it can't get away with the practice.

"I think this is a very important development. And I do hope that shadow of hostage diplomacy has been lifted. And now, the culture of impunity that accompanied it can be combatted."

Guy Saint-Jacques, a former Canadian ambassador to China, said the new arbitrary detention declaration needs to be strengthened with punitive measures such as sanctions. "The trust is gone with China," he said.

Chinese foreign ministry spokeswoman Hua Chunying blasted Canada for aiding the U.S. in a "political frame-up and persecution against a Chinese citizen, an act designed to hobble Chinese high-tech companies as represented by Huawei."

Hua told her ministry's daily press briefing on Monday that Meng was "arbitrarily detained" by Canada — which is how Canada and its allies viewed the imprisonment of Kovrig and Spavor — and that her government, and its leader worked tirelessly to win her freedom.

Hua also reiterated that Kovrig and Spavor endangered China's national security and she said their freedom came because they "applied for release on bail for medical reasons."

Both men were convicted of espionage in closed, secretive and widely criticized trials earlier this year, with Spavor getting an 11-year sentence, while Kovrig was awaiting his fate.

A Chinese newspaper controlled by the Communist party, the Global Times, reported on Sunday that Kovrig and Spavor signed handwritten confessions before they were released.

Global Affairs Canada did not directly respond to questions on this point, saying in a written statement that "these two men are innocent."

But Cotler said even if Kovrig and Spavor did sign confessions, they wouldn't have been worth the paper they were written on.

"I don't believe it took place. And I do know that when people are under not only detention as they were, but torture, in detention, sometimes under that torture, those things occur," said Cotler, the founder of Montreal's Raoul Wallenberg Centre for Human Rights, and a lawyer who has represented numerous political prisoners.

"But I'd say that if it did occur, the fingerprints are on China."

— with files from James McCarten in Washington