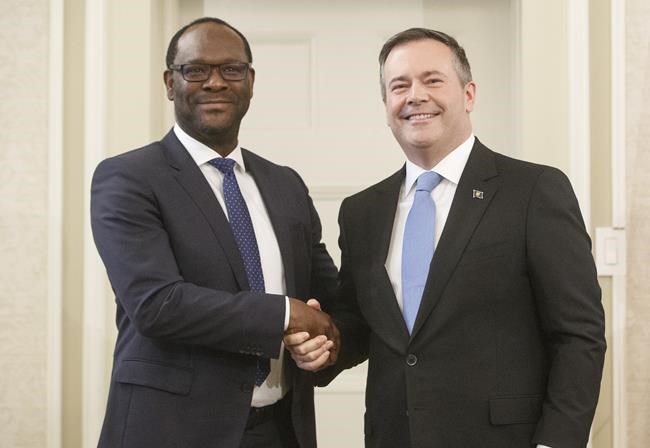 EDMONTON — A retired judge from Alberta’s Court of Queen’s Bench is to determine whether suspended justice minister Kaycee Madu interfered with the administration of justice.

Premier Jason Kenney’s office, in a news release, says Adele Kent will investigate a phone call Madu made to Edmonton Police Chief Dale McFee 10 months ago regarding a traffic ticket.

She has been given a deadline of Feb. 15.

Kenney suspended Madu from his justice duties last week after the phone call was revealed in media reports.

Madu says he did call McFee about the ticket, not because he wanted it cancelled, but to seek assurances he wasn’t being unfairly targeted because he is Black or held a high-profile government position.

Kenney’s office said Kent is to decide whether, regardless of Madu’s intent, the call could be reasonably viewed as an attempt to interfere with justice.

"Minister Madu will provide the Investigator with his full co-operation and assistance."

Critics, including the Opposition NDP, have said the review is not necessary.

They say regardless of intent, having a cabinet minister — especially the justice minister — call the police chief directly about a legal matter of personal interest breaches long-standing protocol on separation of powers and Madu must resign.

Kenney said last week the issue is not clear cut.

He noted that Madu did not ask for his ticket to be rescinded but instead raised larger concerns about issues, including racial profiling.

Madu, the only legislature member the United Conservative government has in Edmonton, had been justice minister since August 2020. He is serving his first term in the legislature.

On the morning of March 10, he was ticketed for distracted driving for being on a cellphone while behind the wheel in a school zone. He paid the $300 ticket soon after but not before reaching out to McFee.

Madu, in his statements, has disagreed with the ticket. He said his phone was in his pocket.

That prompted an angry response from Staff Sgt. Mike Elliott, head of the Edmonton Police Association, which represents rank-and-file officers.

Elliott said if Madu believed he was being unfairly treated, there is a complaint process that should be followed that doesn't include a direct call to the chief of police.

This report by The Canadian Press was first published Jan. 24, 2022.