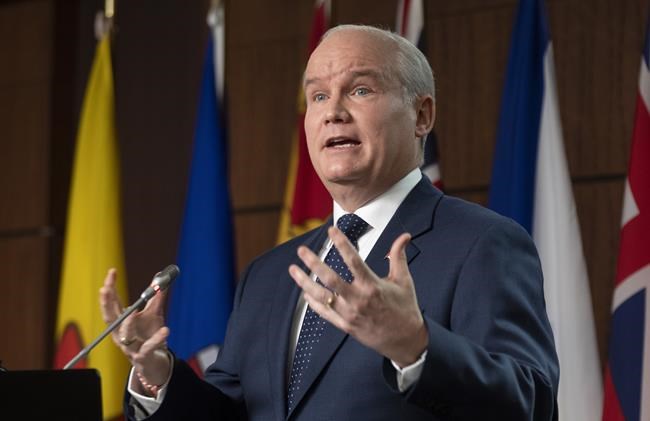 OTTAWA — Conservative MPs meeting for a two-day retreat say they don't expect to be shown the entire review into the party's election loss.

Party spokesman Cory Hann says caucus will be briefed on the contents of the review, including its key findings and recommendations, and will have a chance to ask questions of the author.

Part of the presentation will also focus on Leader Erin O'Toole's performance during the campaign — something those concerned about his leadership are eager to see.

The party wouldn't specify if caucus will be shown the review in its entirety, with a spokesman saying only that O'Toole committed to elected members receiving a briefing, unlike campaign reviews of the past which have been held by the party leader and senior staff.

Heading into Wednesday'smeeting, Conservative MP Marilyn Gladu said as someone who appreciates details, she'd like to see the complete review but is expecting a summary.

Alberta MP Glen Motz said he's confident in his former colleague's ability to handle the review and said he was "sure we'll see the information that we require."

The results of the campaign review come at a time when O'Toole is dealing with calls to undergo a leadership review by mid-June rather than have members wait until 2023 when it's scheduled to happen as part of the party's national convention.

Three riding associations have requested an earlier vote, including the Alberta riding of Foothills and Saskatchewan riding of Carlton Trail-Eagle Creek.

This week, a poll released by Leger showed 58 per cent of Conservative voters thought O'Toole would make the best prime minister, with the firm's executive vice-president Christian Bourque saying it's clear he has members to win back.

The survey also suggested Canadians still aren't ready to put their confidence in O'Toole as he placed third behind NDP Leader Jagmeet Singh and Prime Minister Justin Trudeau as the best choice for prime minister.

A controversial secularism law in Quebec is among the issues slated to be raised during Wednesday's meeting. The Tory position on the law known as Bill 21 is one of the pressures facing O'Toole as he looks to chart a path forward as leader.

Some of his MPs feel the party needs to adopt a tougher stance against the law that prohibits some public servants in Quebec from wearing religious symbols at work. O'Toole has said the issue is best left up to that province to decide andthat his MPs should speak as a team.

When it comes to caucus members expressing their own opinions, many on his team have done so in support of a truck convoy rolling toward Ottawa to protest the Liberal government's vaccine mandate for truckers.

That includes deputy leader Candice Bergen who said Wednesday she supports truckers' right to peacefully protest. These Conservatives are lending support to the convoy even as concerns are being raised about individuals pushing more extreme ideas tagging along with the group.

O'Toole himself refused to say whether he supported the convoy when first asked about it Monday, but during a Facebook Live Tuesday to supporters said he understands why truckers are frustrated and that Canadians have a right to peacefully protest.

Ontario MP Scott Aitchison said Wednesday he believes the convoy's organizer is reasonable and appears to be trying to put on a respectful demonstration.

"There's a few crazies that are trying latch onto it and I hope that it doesn't ruin it for them."

This report by The Canadian Press was first published Jan. 26, 2022.