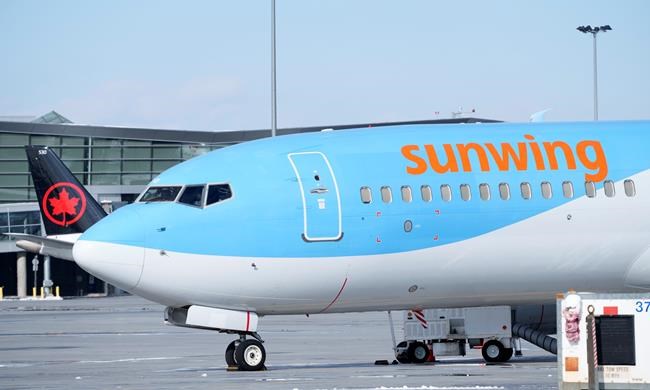 MONTREAL — Passengers are paying a pricey penalty for partying aboard a Sunwing flight last year that devolved into a raucous mile-high soirée.

The federal Transport Department said Tuesday it issued unspecified fines against a half-dozen passengers who were not vaccinated when they boarded the day before New Year's Eve.

Videos of the charter voyage from Montreal to Cancun, Mexico, shared on social media show unmasked passengers in proximity singing and dancing in the aisle and on seats as some clutch bottles of liquor, snap selfies and vape.

Six passengers have now received penalties that could reach a maximum of $5,000 each, Transport Canada said. Under COVID-19 rules, all passengers must be fully vaccinated to board a flight departing the country.

“Certain behaviours reported in connection with the flight on Dec. 30, 2021, are unacceptable and will not be tolerated," Transport Minister Omar Alghabra said in a release.

"Aviation rules must be respected by everyone, for the sake of everyone’s safety."

Transport Canada launched an investigation on Jan. 4 to determine whether travellers violated laws or regulations around aviation safety and security.

"More penalties related to vaccination status may be issued to passengers in the coming days and weeks, depending on the results of the ongoing investigation," spokeswoman Sau Sau Liu said in an email.

"Because of considerations related to the Privacy Act, we are unable to provide any additional details about specific penalties."

Sunwing has said in an email that passengers — some were Quebec-based social media influencers and reality-show personalities — violated aviation regulations and public health rules via “unruly behaviour,” prompting an internal probe.

The flight took off about two weeks after the federal government advised Canadians to avoid non-essential travel outside of Canada.

The organizer of the controversial trip said in late January that Sunwing unfairly abandoned his group in Mexico.

James William Awad told reporters that the Toronto-based airline, along with Air Canada and Air Transat, should be “ashamed” of themselves for refusing to fly the young travellers back to Canada based on videos of the flight that circulated online.

The airlines stranded 154 Canadians in the Yucatán Peninsula without knowing whether they could afford to keep paying for hotels and food, he said.

This report by The Canadian Press was first published March 8, 2022.