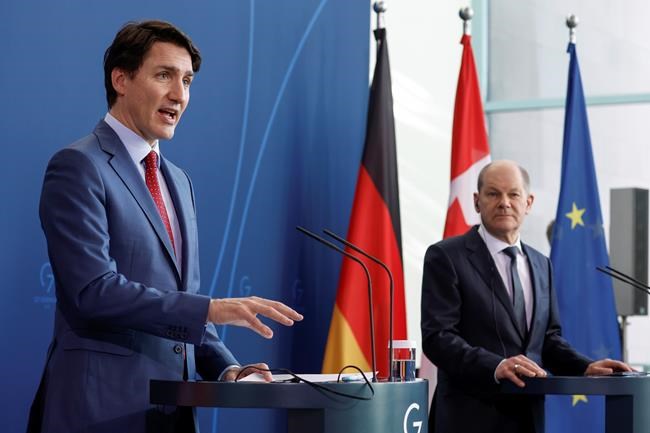 OTTAWA — Prime Minister Justin Trudeau says that while the Russian invasion may be driving up energy prices, it is still providing the impetus to drive the world towards developing greener energy sources.

"The resolve of the world to reduce its dependency on Russian oil and gas is morphing into a heightened urgency for the transformation of our energy mix towards lower carbon emissions in our energies in the coming years," Trudeau said Monday during an event in southern Ontario.

Trudeau's comments came as the G7 pushed back on Russian demands on oil and gas access to an energy-dependent Europe.

Germany's energy minister says the G7 has no intention of giving into Russia's demand that countries pay for natural gas exports in rubles.

Trudeau says he has discussed helping Europe cope with its dependency on Russian energy supplies, including during his visit to Germany earlier this month where he and Chancellor Olaf Scholz talked about greater co-operation on developing hydrogen as a clean energy source.

While Canada and its western allies have been tightening an economic noose around the Russian economy with sanctions and other trade measures since Moscow's Feb. 24 invasion of Ukraine, banning Russian energy in Europe has been problematic.

This report by The Canadian Press was first published March 28, 2022.