Former senator Joyce Fairbairn has died at the age of 82 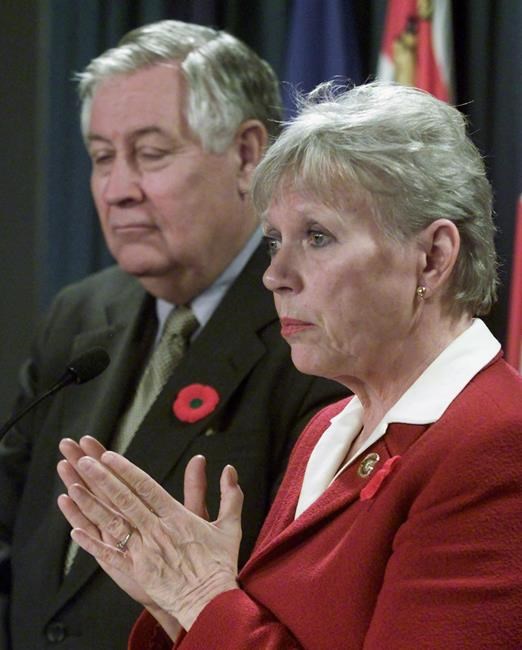 OTTAWA — Colleagues of former Liberal senator Joyce Fairbairn remembered her kindness and determination after she died this week at the age of 82.

Fairbairn began her 50-year career in Ottawa as a journalist in the parliamentary press gallery at a time when very few women were reporting on Parliament Hill.

She went on to enter the political realm, where she became an important adviser to then-prime minister Pierre Trudeau.

Tom Axworthy, who was Trudeau's principal secretary at the time, called her "a groundbreaking woman."

In an interview Wednesday he said their families became very close over the years, and Fairbairn was his eldest daughter's godmother.

"We had a few tears this morning."

Axworthy said she brought warmth and emotional intelligence to the work, and when members of caucus had issues or problems, they almost always went to Fairbairn's office first.

"When you're in the (Prime Minister's Office), keeping your caucus together, united, is just about one of the single most important things you must do," he said.

"Joyce was the Number 1 person for doing that."

She also maintained a strong connection to her hometown of Lethbridge, Alta., and in a government that had its share of issues in Western Canada, "gosh, we needed that a lot," Axworthy said.

Prime Minister Justin Trudeau said in a statement Wednesday that Fairbairn was a "wonderful friend both to my father and me."

"She was a true champion for Canadians and will be dearly missed," he said.

Fairbairn was made a senator in 1984 and became the first woman named government leader in the Senate.

"I remember coming to the Senate for the first time and looking at her in awe," said Nova Scotia Sen. Jane Cordy.

"Even with all the accomplishments that she's had, with all the responsibilities she had during her career both before the Senate and after, she could have been (intimidating), but she wasn't. She was kind to everybody."

Fairbairn retired from the Senate in 2013 after a public struggle with Alzheimer's disease.

In February 2012 she was declared legally incompetent by a psychiatrist, but continued to work and cast votes in the Senate for months afterward, said a report in the Toronto Star. The issue led to calls for the Senate to come up with rules in the event that something similar happens in the future.

"You just saw this brilliant, brilliant woman who was facing so many challenges, and yet it didn't deter her," Cordy said.

"It was very difficult."

During her nearly three decades in the upper chamber, Fairbairn's support of Canada's Paralympic teams earned her an induction into the Canadian Paralympic Hall of Fame as a builder in 2011.

According to the Canadian Paralympic Committee, she represented the government at the 1998 Nagano Paralympic Games, where she learned that funding issues were so severe there were doubts about whether the committee could send athletes to the next games in Sydney in 2000.

Fairbairn founded a fundraising group shortly afterward. In 2000, she helped launch and became chair of the Canadian Paralympic Foundation, an organization that aims to ensure long-term financial support for athletes.

In a statement released Tuesday, the president of the committee said Fairbairn was a pillar of the Paralympic movement during "critical years of growth."

"Her leadership, passion, and determination to strengthen Paralympic sport made a world of difference," wrote Marc-André Fabien.

"She was always a huge fan of all of Canada’s Paralympians, and we so appreciated all of her support."

Fairbairn was made a member of the Order of Canada in 2015 in recognition of her career, her advocacy for literacy and for the Paralympic movement, and her work with Indigenous people.

She was also made an honourary colonel of the Royal Canadian Artillery's 18th Air Defence Regiment in 1997.

Fairbairn died Tuesday at a continuing care facility in Lethbridge.

This report by The Canadian Press was first published March 30, 2022.