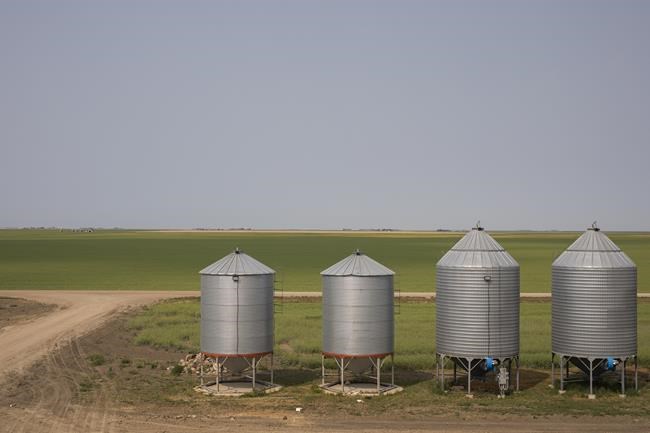 REGINA — Dickson Delorme, who farms near the town of Foam Lake, Sask., says he stockpiled fuel weeks ago to prepare for the federal carbon tax increase.

With seeding season about to start, many Saskatchewan farmers are looking to save where they can, as inflation, rising fuel and fertilizer prices and last year's near-record drought continue to put pressure on their bottom line.

"We're heading into our busy season and the government is saying, 'By the way, while everything is completely in the dumpster and nobody can afford to live, we're going to make it more expensive for you to live,'" Delorme said.

The federal carbon price rose to $50 from $40 per tonne of greenhouse gas emissions on Friday. That adds 2.2 cents to a litre of gasoline, meaning the carbon tax now makes up a total of 11 cents at the pump.

The federal tax applies to Alberta, Manitoba, Ontario and Saskatchewan, which lack a program that regulates emissions from electricity generation and natural gas transmission.

While farm fuel is exempt from the carbon tax, Delorme said producers pay it in other ways through the costs of heating, grain drying and fuels to transport products to market.

"You can look at anywhere between $500 to $1,000 a load, depending on how far that load is headed to," Delorme said. "(Commercial trucking companies) can’t afford to fit it into their rates anywhere, so it comes right back to the farmers as a line item charge on their trucking invoice as a fuel surcharge."

In 2021, a bill went through the House of Commons to exempt natural gas and propane from the carbon tax if it is being used to dry grain. But the bill died when the federal election was called. A new bill has since been tabled, but it has yet to pass.

Agriculture accounts for 10 per cent of Canada's total carbon dioxide emissions, with more than half of the sector's emissions coming from Alberta and Saskatchewan.

Ian Boxall, president of the Agriculture Producers Association of Saskatchewan, said it's a common misconception that farmers are not affected by the tax, or that they get it back entirely through rebates.

He said the average farmer in Saskatchewan paid up to $10,000 extra a year in the tax, before the planned increase.

"It's an expense straight off our bottom line. We do not have the ability to pass that cost along to our customers, as we are price takers with the products we sell," Boxall said.

Earlier this month, the Office of the Parliamentary Budget Officer said those charged the levy are paying more in carbon tax than they are getting back.

"Under the government’s (A Healthy Environment and A Healthy Economy) plan, most households in Alberta, Saskatchewan, Manitoba and Ontario will see a net loss resulting from federal carbon pricing," said parliamentary budget officer Yves Giroux.

"That is, the costs they face — including the federal carbon levy, higher GST and lower incomes — will exceed the Climate Action Incentive rebate they receive."

While the carbon tax has been in place since 2019, Boxall said the recent increase feels different.

"Producers are affected the same as anyone else with inflation and everything else that's going on, like the conflict in Ukraine. The added costs are not needed right now," said Boxall, who farms near the town of Tisdale.

Environment Minister Steven Guilbeault did not respond to a request for comment. But throughout March, he resisted political pressure from premiers and members of Parliament to temporarily pause the increase.

Earlier this month, Premier Scott Moe reiterated Saskatchewan's desire to gain regulatory control of the carbon pricing plan, including its revenue, which he said would be distributed to consumers and industries like agriculture, as well as invested in green initiatives.

"We've asked the federal government officially for this. I don't believe we have heard back as of yet, but I would hope — and I communicated it with the deputy prime minister — that we'll be looking for it in the federal budget," Moe said.

Saskatchewan's first carbon pricing plan was rejected by Ottawa in July of 2021.

The federal government has stated it won't look at new submissions until next year.

This report by The Canadian Press was first published April 2, 2022.