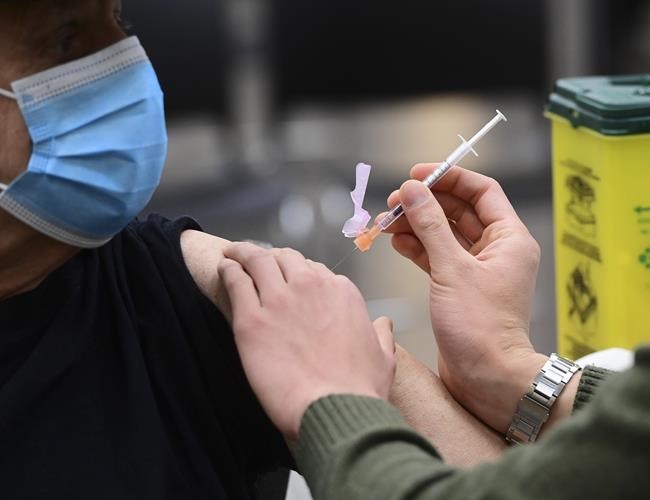 MONTREAL — While remaining unvaccinated against COVID-19 is often framed as a personal choice, those who spurn the vaccines raise the risk of infection for those around them, a new study suggests.

The research published Monday in the Canadian Medical Association Journal found that vaccinated people who mix with those who are not vaccinated have a significantly greater chance of being infected than those who stick with people who have received the shot.

In contrast, unvaccinated people's risk of contracting COVID-19 drops when they spend time with people who are vaccinated, because they serve as a buffer to transmission, according to the mathematical model used in the study.

Co-author David Fisman, of the University of Toronto's Dalla Lana school of public health, said the message of the study is that the choice to get vaccinated can't be thought of as merely personal.

"You may like to drive your car 200 kilometres an hour and think that's fun, but we don’t allow you to do that on a highway partly because you can kill and injure yourself, but also because you're creating risk for those around you," he said in a recent interview.

Fisman said the idea for study came a few months ago amid the debate around vaccine passports and vaccine mandates.

The conclusion, he said, is that "public health is something you actually have to do collectively."

"What we kind of concluded is that the decision to not be vaccinated — you can't really regard it as a self-regarding risk (because) you're creating risk for other people around you by interacting with them," he said.

The researchers used a mathematical model to estimate how many infections would occur in a population, depending on how much mixing occurred between vaccinated and unvaccinated people. It found that when people mixed with people of a similar vaccination status, infection rates among vaccinated people decreased from 15 per cent to 10 per cent, and they increased from 62 per cent to 79 per cent among those who were vaccinated.

Fisman said that in real life, people tend to spend the most time with people who are similar to them. So, he said, even if vaccinated people are most likely to spend time with others who have received shots, they're disproportionately impacted when they spend time with those who haven't.

He said the arrival of more contagious COVID-19 variants, such as Omicron, have impacted both vaccine effectiveness and public faith in vaccination. But he said that even when vaccine efficacy was lowered to 40 per cent in the model and the reproductive rate was increased to account for a more contagious variant the overall conclusions were the same.

He said the study actually underplays the importance of vaccines in one way because it doesn't take into account how they vastly cut the chances of death and hospitalization.

Fisman said the results, from a purely "utilitarian" perspective, provide justification for the implementation of public health measures such as vaccine passports and vaccine mandates.

However, he acknowledges that a simple mathematical model doesn't fully reflect the real world or the diverse factors that must be taken into account when setting public health policy, including political considerations and public anger.

This report by The Canadian Press was first published April 25, 2022.